The Beating Retreat Ceremony marks the culmination of the week-long celebration of Republic Day of India. 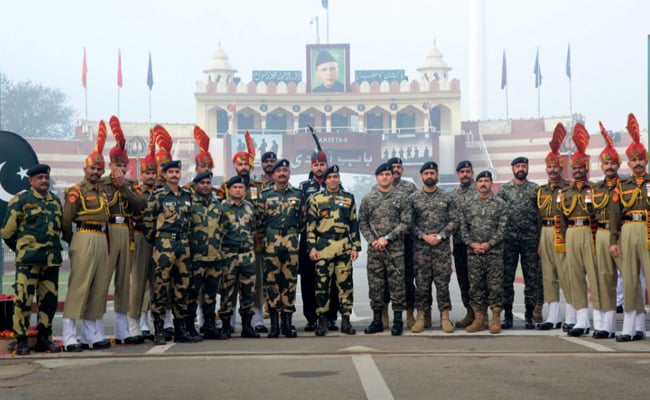 The Beating Retreat ceremony was organised at the Attari-Wagah border near Punjab's Amritsar on the occasion of Republic Day.

After "Abide With Me", one of Mahatma Gandhi's favourite hymns, was dropped from this year's Beating Retreat ceremony, the government sources on Sunday clarified that the "Aye Mere Watan Ke Logo" is a touching lyric that highlights the "Unity in Diversity" aspect of the Indian soldiers and has a very mesmerizing and solemn impact.

#WATCH Beating Retreat ceremony at the Attari-Wagah border near Amritsar, Punjab on #RepublicDaypic.twitter.com/EEXxUQWdk9

The government sources said that the Beating the Retreat ceremony in India traces its origins to the early 1950s when Major Roberts of the Indian Army indigenously developed the unique ceremony of display by the massed bands.

It is also said that during the initial years after independence, not many tunes of Indian origin were available and played by the bands.

The Beating Retreat Ceremony marks the culmination of the week-long celebration of Republic Day, With India being the world's largest democracy.

Phasing out of tunes handed down from a colonial past and including tunes that have a wider and deeper connection with the people of India is an exercise that is an ongoing one.

"Abide with Me" is a popular military tune but the lyrics for this are understood by a limited few.

The iconic tune and lyrics for "Aye Mere Watan Ke Logo" has a far wider connection with the people of India. It is contextually far more appropriate to celebrate the valour and gallantry of the Armed Forces of India as compared to "Abide with Me" and the song also evokes a strong sense of patriotism with all Indians. It is for this reason, that in the 75th year of our Independence, we are making this change in the concluding performance of the Beating Retreat 2022.