AIADMK members had trooped into the well as soon as the House resumed in the afternoon and were continuously shouting slogans "We want Justice, take the permission (to build dam on Cauvery) back, Don't deny rights of Tamil Nadu", disrupting functioning. 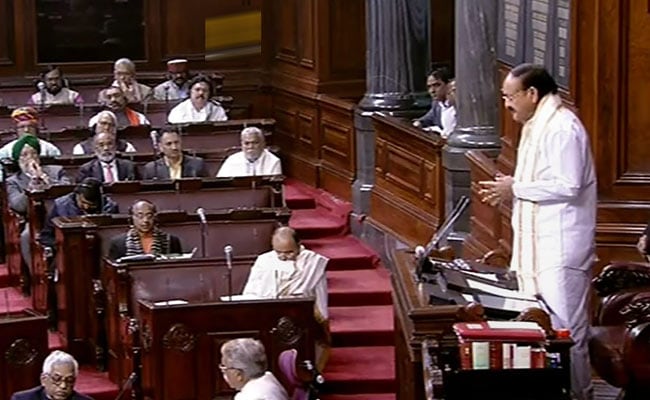 Venkaiah Naidu asked both parties from Tamil Nadu to leave the House for the day. (PTI Photo)

Rajya Sabha Chairman M Venkaiah Naidu Wednesday ordered members of AIDMK and DMK to leave the House for the day when they continued to protest in the Well over the Cauvery issue.

The House had to be adjourned twice in the afternoon amid din over the issue and finally for the day, minutes after it reassembled at 3 PM.

The protest by these members prompted Mr Naidu to invoke Rule 255, asking over a dozen members of both parties from Tamil Nadu to leave the House for the day.

Rule 255 provides that the Chairman may direct any member whose conduct, in his opinion, is grossly disorderly to withdraw immediately from the council.

It says any member so ordered to withdraw shall do so forthwith and shall absent himself during the reminder of the day's meeting.

AIADMK members had trooped into the well as soon as the House resumed in the afternoon and were continuously shouting slogans "We want Justice, take the permission (to build dam on Cauvery) back, Don't deny rights of Tamil Nadu", disrupting functioning.

One of the member said the Government of India has "shamed" Tamil Nadu.

Mr Naidu also said the minister had been called to the House to deliver a statement following the Tamil Nadu members' request and now he should be allowed to do so.

However, the members from AIADMK continued their protest in the Well, with four DMK members also joining to associate with them.

In the meantime, Mr Naidu said now the minister (Gadkari) would not make a statement.

He then asked Home Minister Rajnath Singh to move a resolution to proclaim President's rule in Jammu and Kashmir on December 19, 2018 under Article 356 of the Constitution.

Mr Singh tabled the resolution which was already approved in Lok Sabha on December 28, 2018.

He delivered his statement amid the din. The Opposition leader Ghulam Nabi Azad was invited to initiate the discussion on the resolution but the Chairman had to briefly adjourn the House.

Before adjourning, the Chairman asked the AIADMK and DMK members to leave for the day.

When the House resumed, Deputy Chairman Harivansh asked the concerned members to leave the House but they continued to protest.

Harivansh said,"In this situation the House is adjourned till 3 PM." As the House reassembled, DMK and AIADMK Members again trooped into the Well, shouting slogans.

"I am left with no other other alternative than to adjourn the House for the day", the Deputy Chairman said.