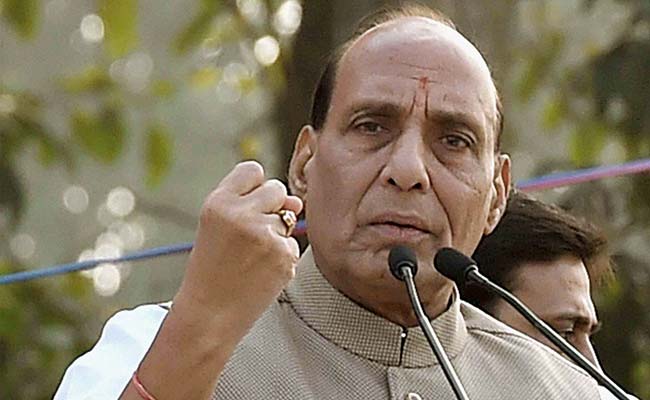 Home Minister Rajnath Singh's comments came when asked about the ISIS threat in the country.

Greater Noida: Amidst the growing attempts by ISIS to lure youths into its fold, Home Minister Rajnath Singh today said the security agencies were capable of dealing with any threat posed by the terror group.

"We have the capacity to meet any threat. We will face it," he told reporters on the sidelines of a function in Greater Noida.

The home minister's comments came when asked about the ISIS threat in the country.

Last week, 14 youths were arrested by the NIA and other security agencies after they allegedly formed a module on the pattern of dreaded ISIS to carry out strikes at vital installations.

The simultaneous raids were carried out in five states of Karnataka, Telangana, Andhra Pradesh, Maharashtra and Uttar Pradesh where the suspects were arrested. They were part of a group named 'Janood-ul-Khalifa-e-Hind' (Army of Caliph of India), a terror group which has almost similar ideologies that of ISIS.

According to Indian intelligence agencies, a total of 23 Indians have so far joined the ISIS of which six were reportedly killed in different incidents in Iraq-Syria.

Among the 23 are two absconding members of the banned Indian Mujahideen who had gone from their hideouts in Pakistan.

Around 150 Indians are under surveillance for their alleged online links with ISIS.

As many as 30 other Indians, who were radicalised by ISIS elements, were prevented from travelling to the conflict zone in the Middle-East.

Among those who are currently fighting for ISIS include two youths from Kalyan in the outskirts of Mumbai, an Australia-based Kashmiri, one youth from Telangana, one from Karnataka, one Oman-based Indian and another Singapore-based Indian.

On September 15, 2015, the UAE deported four Indians suspected to have links with ISIS.

The UAE had also sent back in September last year a 37-year-old woman Afsha Jabeen alias Nicky Joseph who was allegedly involving in recruiting youths for ISIS.

In January 2015, Salman Mohiuddin of Hyderabad was arrested when he was preparing to board a flight to Dubai on way to Syria via Turkey.

There have been reports that some elements, who support the ISIS, have posted messages in regional languages, including Hindi and Tamil.