Rajinikanth, Meditating In Himalayas, Says He's Not Full-Time Neta Yet

Rajinikanth had last week said there was a political vacuum in Tamil Nadu that he would fill. 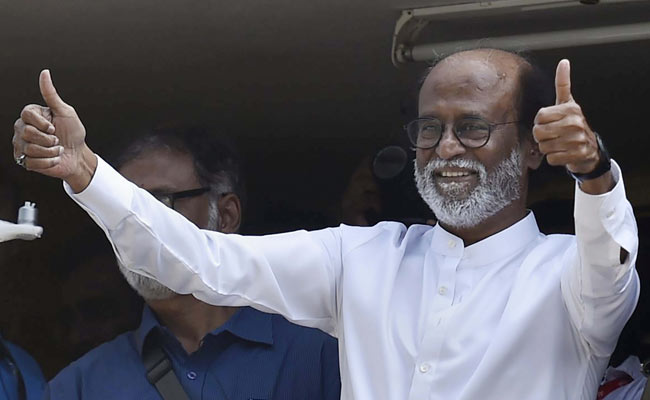 Rajinikanth is on a two-week break in the Himalayas

Rishikesh: Superstar Rajinikanth, on a two-week spiritual trip to the Himalayas, has said he has still not become a full-time politician. "I have not announced my party. I don't want to talk anything about politics (now)... Still I have not become a full-time politician," he told reporters at the Dayanand Saraswati Ashram in Rishikesh in Uttarakhand, where he will be meditating for a few days.

Rajinikanth, 67, was replying to a question by reporters about actor-turned-politician and Makkal Needhi Maiam founder Kamal Haasan's comments yesterday that he had not reacted on various political matters.

Last week, in his first public speech after announcing his decision to enter politics, Rajinikanth had said there was a political vacuum in Tamil Nadu that he would fill.

On December 31, Rajinikanth had announced he would launch a party and contest all 234 assembly constituencies in Tamil Nadu in the next elections due in 2021. He said he would launch the party after elections were announced in the state, refusing to say he would contest the national election in 2019. He would take a call later, he said.

Both Kamal Haasan and Rajinikanth are seen to have timed their debuts to take advantage of a political vacuum in Tamil Nadu politics following former Chief Minister and AIADMK chief J Jayalalitha's death and DMK boss M Karunanidhi's age and poor health.

Rajinikanth, who has been going to the Himalayas for over a decade now, arrived in Rishikesh after a short trip to Dharamsala in Himachal Pradesh and a Shiva cave in Jammu.

He said he has come to the Himalayas on a spiritual journey and it has nothing to do with his starting a political party.

Promoted
Listen to the latest songs, only on JioSaavn.com
"This is not the first time... I have come here many times. Spiritualism is to realise oneself," he said.

Congress Alleges Under-Reporting Of Covid Deaths In States Like Gujarat