Rajasthan Doctors Continue Strike On Day 11 Amid Reports Of Deaths

The doctors' strike has left medical services paralysed with several deaths reported in different parts of the state. The Congress has claimed that more than a dozen persons have died in Ajmer. 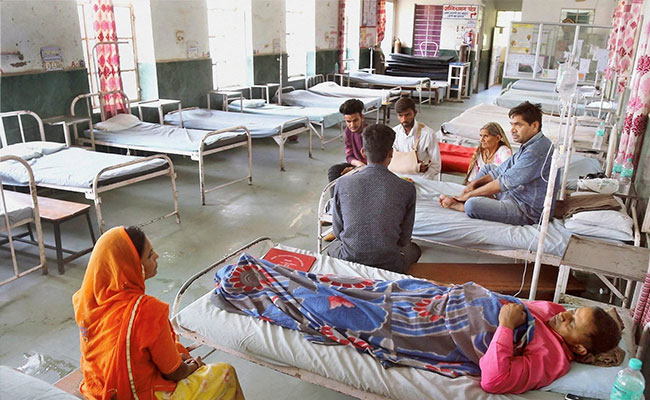 Rajasthan Doctors Strike: Around 300 patients have died in the state, said sources. (Representational)

Jaipur: As medical services in Rajasthan remained paralysed for the eleventh day on Tuesday and deaths were reported due to the strike by doctors, state Health Minister Kalicharan Saraf said the government would not take any action against doctors who had joined duty by December 26, but would follow the Rajasthan High Court orders and act against doctors who had failed to join the duty.

The sources claimed the Tribunal has also directed that FIR be filed against doctors due to whose dereliction of duty around 300 patients have died in the state.

The doctors' strike has left medical services paralysed with several deaths reported in different parts of the state. The Congress has claimed that more than a dozen persons have died in Ajmer.

Meanwhile, most doctors have gone underground fearing arrest after the High Court on Monday directed the state government to deal strictly with striking doctors.

The Rajasthan High Court for the first time remained open for routine work on Christmas on Monday.

The division bench of Rajasthan High Court, which was headed by Chief Justice Pradeep Nandrajog and D.C. Somani directed the state government to deal with the striking doctors with an iron hand.

"Apprehend the doctors under the law and even under the Rajasthan Essential Services Maintenance Act (RESMA) 1970," ordered the High Court.

The court remained open to hear a PIL filed by Abhinav Sharma, advocate of Rajasthan High Court, who requested the Chief Justice to take up the matter urgently as doctors had called for closure of all kinds of medical services, including private medical hospitals and medicine shops, on December 25.

The doctors' strike has also taken political overtones with the Congress party accusing the state administration of instilling fear among the doctors fraternity.

Congress leader Sachin Pilot speaking to media, held the BJP government responsible for the crippling of medical services in Rajasthan.

"The government should leave its adamancy and start a dialogue with doctors to ensure the strike ends at the earliest.

"How can the government be so insensitive? Why can't it see so many people dying owing to lack of medical services in the state. More than a dozen people have died in Ajmer which speaks a lot about the failed medical services here. However, the state government is yet to listen to the problems of doctors," he added.

Earlier the All Rajasthan In-Service Doctors' Association lawyer at a press conference said that the doctors would resume work only after "the vindictive action" against them is stopped.

Promoted
Listen to the latest songs, only on JioSaavn.com
The lawyer had said the government should withdraw the transfer orders of 12 in-service doctors, including the President of All Rajasthan In-Service Doctors Association.

Initially, the doctors had planned to go on mass leave on December 15 against the transfers, but the government invoked RESMA and started arresting doctors, he had said on behalf of the striking doctors.