The Anti-Corruption Bureau on Tuesday arrested suspended Jaipur Mayor and BJP leader Somya Gurjar's husband and a representative of a firm on charges of corruption. 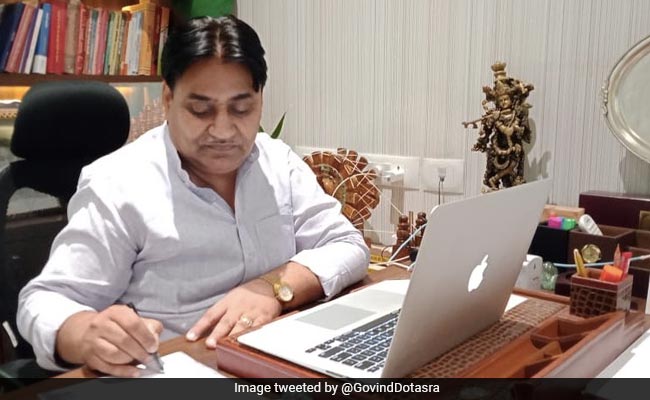 Hitting back, the BJP said targeting the RSS will cost the state government dearly.

The Anti-Corruption Bureau (ACB) had on Tuesday arrested suspended Jaipur Greater Municipal Corporation Mayor and BJP leader Somya Gurjar's husband Rajaram Gurjar and a representative of BVG company on charges of corruption in the case.

The case was registered on the basis of a video clip that surfaced on social media, in which Rajaram Gurjar and the company representative are purportedly seen engaged in a conversation related to the Rs 20 crore "commission" from the firm for getting its payment released from the municipal body.

RSS regional pracharak Nimbaram is also seen sitting with them in the video.

Demanding Nimbaram's arrest, Mr Dotasra said the BJP and the RSS have been "fully exposed".

"They call themselves honest, nationalists and disciplined but under the guise of nationalism and in the name of religion, they are involved in rampant corruption, which has been exposed," Mr Dotasra told reporters, demanding the RSS leader's arrest.

He said the RSS leader is seen in the video clip on the basis of which the ACB registered the case.

Referring to the alleged corruption in the purchase of land for the Ram Temple in Ayodhya, he said RSS functionaries have been exposed all over the country and called for their social boycott.

"Stern action should be taken against such people and they should be arrested," said Mr Dotasra, who is also the state Education Minister.

The ACB had registered the graft case against Rajaram Gurjar, Nimbaram and company representatives Omkar Sapre and Sandeep after the video clip was sent for an examination to two laboratories, who confirmed that they were not doctored.

Lashing out at the Congress government in the state, Deputy Leader of Opposition in the Rajasthan Assembly Rajendra Rathore said the case was registered to malign the image of the nationalist organisation, which is engaged in the service of the nation and for diverting public attention from real issues.

"It is the first instance where the ACB has converted a preliminary inquiry into an FIR without any complainant. The ACB first sent the video to a Rajasthan Forensic Science Laboratory (FSL) and then to a laboratory in Telangana whereas it should have sent it to the central FSL if the agency was not satisfied with the report of the Rajasthan lab," he said.

"The government has dared to target a nationalist organisation and this will prove costly to the government," he said.

Rajendra Rathore targeted the government on the issue of corruption and questioned the appointment of a former Indian Administrative Service officer, accused in a land deed case, as the adviser to the Urban Housing and Development Department.

He said the government also filed an affidavit in the court to withdraw the case against him.

Former state BJP president Arun Chaturvedi said the Congress government deliberately targeted the RSS and his party will take up the matter at all levels.