The victim's son said the Chief Minister has assured the family that they will get state protection. He also demanded that the killers be hanged. 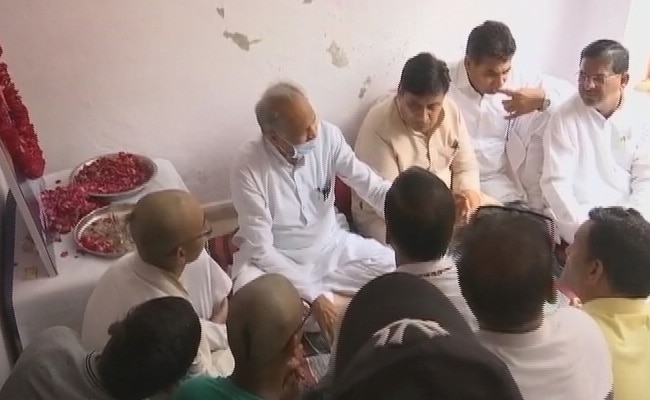 Ashok Gehlot handed over a cheque of Rs 51 lakh to the family as compensation.

Rajasthan Chief Minister Ashok Gehlot along with the state's top officials and Congress MLAs today visited the family of Kanhaiya Lal, the tailor who was murdered on Tuesday, at their home in Udaipur. He handed over a cheque of Rs 51 lakh to the family as compensation.

Speaking to the media after his visit, Mr Gehlot said he would speak to Home Minister Amit Shah as well and request that the National Investigation Agency (NIA) complete its probe in the case within a month. This is a heinous murder that has shaken not just the state but the entire country, he said and went on to commend the state police for swiftly arresting the accused and finding out their international links.

The victim's son said the Chief Minister has assured the family that they will get state protection. He demanded that the killers be hanged. "Nothing less than that, the accused must be hanged to death," he said. The Chief Minister informed us that two cops have been suspended for negligence and action might be taken against others as well, he said. "They have even lived in Karachi for 45 days, there's a link," he said, as relatives around the son tried to dissuade the media from questioning him saying the community leaders will answer questions as the son is just a boy.

As outrage spirals over Kanhaiya Lal's murder, stone-throwing erupted briefly today during a protest march by hundreds in Udaipur. The riot police moved in to control the crowds.

About 1,000 protesters from various Hindu organisations held up saffron flags and chanted slogans demanding justice as the procession marched under heavy security. Tensions peaked as the protesters walked near the area where the horrific murder took place on Tuesday. The police dispersed the agitated crowd.

Kanhaiya Lal was murdered by two cleaver-wielding men who filmed the grisly killing and later gloated about it in a video. He was at his shop in the city's busy Dhan Mandi market when the attackers Gos Mohammad and Riyaz Akhtari walked in posing as customers before attacking him.

The post-mortem report revealed there were 26 stab wounds on the body of the 46-year-old tailor who a former IPS officer said was a victim of an "ISIS-type execution". However, it is not clear whether all the injuries were caused by the cleaver, police sources told news agency PTI.

Mr Gehlot has appealed to the people of Rajasthan to help maintain law and order in the state. He also urged religious leaders, representatives of the people, and social activists to appeal to people to ensure peace in society.

The murder made national headlines and triggered tension in Rajasthan's Udaipur. A terror investigation has also been ordered by the Centre after investigations revealed the killers' links with a Pakistan-based terror group.

Congress leader Sachin Pilot on Thursday said that the gruesome murder has surpassed all limits of humanity and that the killers, through fast-track court, should be given such a punishment that will set an example for the entire country.