Rahul Gandhi said the GST has brought lakhs of small traders to their knees, a charge that the opposition has been levelling against Prime Minister Narendra Modi as part of a composite takedown of his handling of the economy.

Rahul Gandhi said the GST has brought lakhs of small traders to their knees.

New Delhi: Rahul Gandhi, who is campaigning in Gujarat today, borrowed from the BJP's toolkit today by expanding GST, the acronym for the national sales tax, into "Gabbar Singh Tax", christening it after one of India's biggest fictional villains.

Rahul Gandhi said the GST has brought lakhs of small traders to their knees, a charge that the opposition has been levelling against Prime Minister Narendra Modi as part of a composite takedown of his handling of the economy.

In Delhi, senior BJP leader and union minister Ravi Shankar Prasad also drew inspiration from Bollywood as he described Rahul Gandhi's party as "Dramebaaz Party Number One" (he said it belongs in the popular '90s series of "Aunty No 1" and "Coolie No 1")  based on its aggrandizing of recent events in Gujarat.

Over the weekend, Alpesh Thakore, a newly-prominent young leader of backward castes in Gujarat, met Mr Gandhi at his residence in Delhi and said that he will join the Congress in the next few days. "They say a big leader is coming back to Congress party -- when did he ever leave," said Ravi Shankar Prasad, sharing that Alpesh Thakore's father was a Congressman. 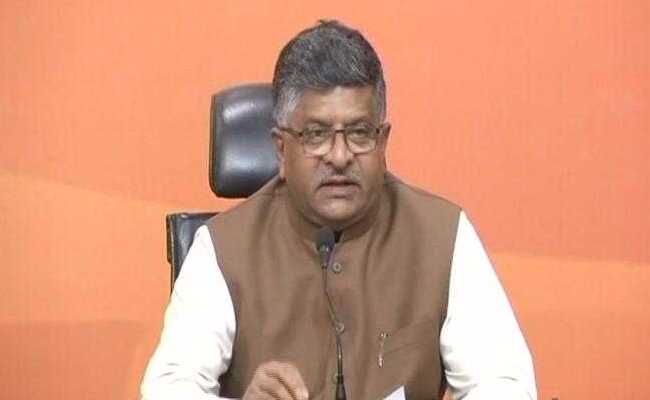 If Rahul Gandhi had "done his homework right", the minister suggested, he could have saved the Congress "all the drama" in declaring that it has acquired a senior leader in Gujarat ahead of the state election.

The election in Gujarat will be completed by December 18, the Election Commission has said, though it has commissioned a major controversy by not yet announcing the dates for voting and counting.  The Congress says this has been done to ensure that the PM has a large window to announce policies and projects that will skew voters towards his party, which has governed Gujarat uninterrupted for two decades.

Hardik Patel, the 24-year-old leader of the powerful Patidar caste, has announced his intent to work against the BJP for the Gujarat election, which places him on the same side as the Congress.

Promoted
Listen to the latest songs, only on JioSaavn.com
The BJP has been accused late last night by a new recruit in Gujarat of "buying him" for a crore - with a down payment of 10 lakhs that he showed off at a press conference. Narendra Patel is from Hardik Patel's fledgling outfit that says it's fighting for affirmative action policies for the Patidar caste, once a loyal support group of the BJP that feels backward castes have progressed at its expense. Narendra Patel said that he was given the cash over the weekend and told that the balance would be furnished by the BJP after he appeared publicly at an event led by Chief Minister Vijay Rupani.

The BJP has described the scandal as subterfuge by the Congress.
Comments
Rahul Gandhi