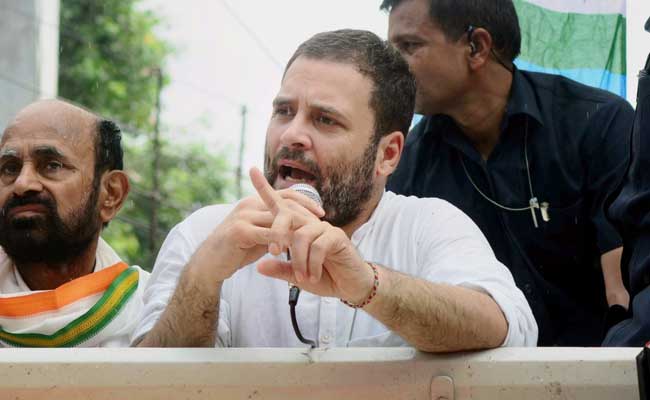 New Delhi: Rahul Gandhi today questioned Modi government's resolve to work for soldiers' welfare, asking the Prime Minister to first implement the 'one rank, one pension' scheme in a meaningful way and redress their pay anomalies and other grievances.

The Congress Vice President wrote to Prime Minister Narendra Modi saying he was saddened at the decisions of the government taken in the last few weeks "which are far from reassuring the soldiers and has caused them pain instead".

Steps should be taken to send a message to soldiers on Diwali expressing "our gratitude both in words and in deed", Mr Gandhi said in his letter to the Prime Minister who has launched a campaign through which people can send their Diwali greetings and messages to soldiers guarding the nation's frontiers to boost their morale.

The PM will celebrate this Diwali with ITBP personnel at one of the remotest border posts in Uttarakhand.

"Just days after our soldiers conducted the surgical strikes, the disability pension system was converted to a new slab system, that in many instances drastically reduces the pension received by these brave men in case of a disability," the Congress leader said.

"OROP must be implemented in a meaningful way to satisfy ex-servicemen and the anomalies in the 7th Pay Commission must be addressed at the earliest, because soldiers should not have to struggle to claim what is surely due to them on behalf of a grateful nation," Rahul said, claiming that some decision of the government have "adversely affect the morale of our armed forces".

Promoted
Listen to the latest songs, only on JioSaavn.com
The Prime Minister had earlier accused Congress of not taking the OROP issue seriously by earmarking a paltry sum of Rs 500 crore for it.

Mr Gandhi said, "As a responsible democracy we must make sure that the brave soldiers who put their lives on the line for each one of us, feel the love, support and gratitude of 125 crore people."

"I therefore urge you Prime Minister to ensure that our soldiers get their due whether it is regarding compensation, disability pension, or parity with civil employees," he said.

Mr Gandhi said that the roll out of 7th Pay Commission continues to keep the defence forces at a disadvantage and further exacerbates the disparity between them and civil employees.

"As we celebrate Diwali, and rejoice in the victory of light over darkness, let us send this message to our soldiers that our gratitude is expressed both in words and in deed. This is the very least we owe to those who give up their today to secure our tomorrow," the letter further said.