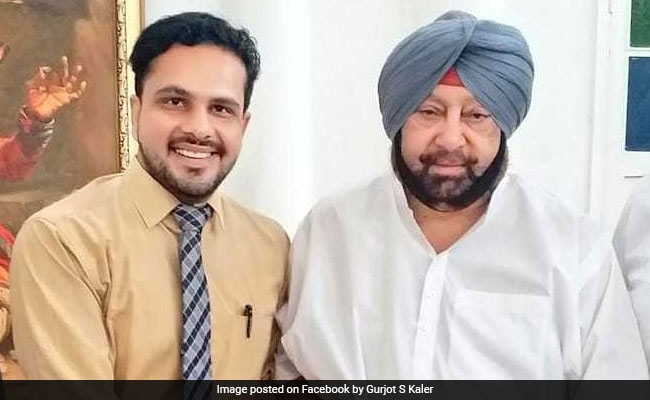 Being part of a police force that has earned a reputation for having taken on terrorism head-on and neutralising it, a young officer from Punjab has learnt all the tricks of dealing with crime-related issues. But the intellectual in him has forced him to make an attempt to deal with bigger issues facing the country - even offering solutions.

In his maiden book, "New India: The Reality Reloaded", author Gurjot S. Kaler, a Deputy Superintendent of Police (DSP), has researched various concerns, conflicts and challenges facing India and put them in perspective.

"The topic that I chose for my very first book involved a great deal of research since the issues being faced by the country are enormous in magnitude. It took a lot of hard work and sustained research going through every topic deeply. My book not only highlights the challenges facing the country but also makes an attempt to offer solutions," Mr Kaler, 29, said.

In 40-chapters spread across 388 pages, Mr Kaler has not only highlighted known issues like poverty, corruption, terror, water crisis, educational reforms, climate change, economic slowdown, the Kashmir imbroglio, drugs abuse, health, hunger, farmers and agricultural reforms, but has also taken up topics like the VIP culture and red beacons, why India fails to win medals in sports, decoding the mystery of the Dera cult in India, begging as an organised crime, psychology behind the hate killings of Indians in foreign lands, homosexuality and others.

In the chapter on VIP culture, Mr Kaler admits that India can be "labelled as the world capital of so-called Very Important Persons". Coming from a person who is himself part of that system, where flaunting one's official status and gun-totting security is an integral part, this is indeed creditable.

In the chapter on intolerance and jingoism, the author states: "There is certainly a dangerous brand of nationalism whereby one's loyalty to one's nation is supposed to be proved by remaining just mute spectators and adherents of how the majority wants you to listen, behave, act and speak... The online trolling and hate abuse being routinely unleashed against many Indians who fail to pass the myopic tests of pseudo-nationalism is actually enough to create unimaginable levels of fear, distress and terror amongst the innocent masses.

"Even issues like India's obsession with loudspeakers, which is a prevailing nightmare throughout the country, the toxic challenge of food adulteration, spread of superstition, growing intolerance, the need to have caste-based reservations and protecting India's daughters are dealt with as separate chapters in the book. "This book has been purposefully written in a very lucid, interactive and comprehensible manner so that the reader (finds it an) interesting, intelligible and enjoyable experience to go through the various contents," noted Mr Kaler, who said that he got into writing about these issues as "in every problem lies an inherent opportunity to solve them".

Born to doctor parents, Mr Kaler is an avid golfer and loves mountaineering, travelling, blogging, performing bike stunts and indulging in adventure sports. Before joining the police force, he worked as a professional psychologist and counsellor. He holds a Masters degree in Psychology from Panjab University, Chandigarh, and a Masters in Police Administration, besides other diplomas in professional counselling, cyber laws, journalism and human rights.