The Mohali police put up barricades and tippers and rolled out water cannons to prevent protesting farmers from entering Chandigarh. Heavy contingent of police was deployed at the Chandigarh-Mohali border. 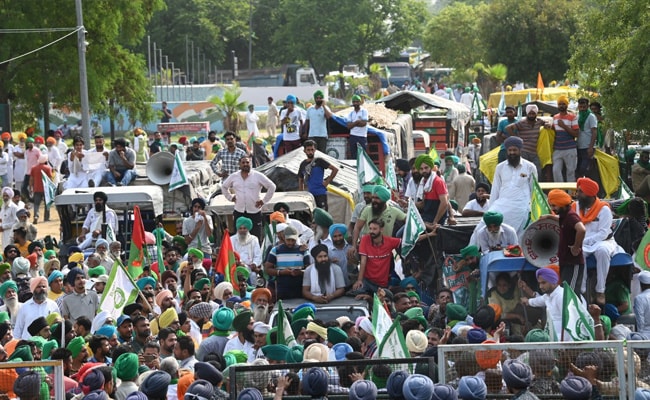 Farmers parked their vehicles on the road after they were denied entry by the police.

Punjab farmers sat on a protest near the Chandigarh-Mohali border on Tuesday after being stopped from heading to the state capital to press the AAP government with various demands, including a bonus on wheat and beginning paddy sowing from June 10.

In an ultimatum to the Punjab government, farmer leader Jagjit Singh Dallewal said if Chief Minister Bhagwant Mann does not hold a meeting with the protesters by tomorrow to redress their grievances, they will move towards Chandigarh breaking barricades.

A heavy contingent of police was deployed at the Chandigarh-Mohali border in the wake of several farmer bodies' call for an indefinite protest in the Union Territory over their demands.

The Mohali police put up barricades and tippers and rolled out water cannons to prevent protesting farmers from entering Chandigarh. The Chandigarh police too made similar security arrangements.

"It is the start of our struggle in Punjab and it will continue till our demands are met. Only 25 per cent of farmers have come here so far. More will come tomorrow. It is a do or die battle," said a farmer leader.

Several farmer unions had given a call for an indefinite protest in Chandigarh on the lines of the year-long agitation at the Delhi borders against the Centre's three farm laws which were repealed in response to the protests.

The call for the indefinite protest was given by the farmer bodies several days ago.

Among their various demands, farmers want a Rs 500 bonus on each quintal of wheat as their yield has dropped and shrivelled because of unprecedented heatwave conditions.

They are also against the Punjab government's decision to allow paddy sowing in a staggered manner from June 18 to lessen the electricity burden and conserve underground water.

The protesters want the government to allow them to sow paddy from June 10. They also want a notification issued for the minimum support price for maize and moong.

They are also demanding the government lower the charges on the extension of electricity load from Rs 4,800 to Rs 1,200, 10-12 hours of power supply and release of outstanding sugarcane payment. The protesters are also against the installation of smart electricity meters.

The protesting farmers said they had got a message from the Punjab government for a meeting.

"We got a message from the Union Territory DGP that a meeting with Chief Minister Mann has been fixed on Wednesday at 11 am. Then another message came, saying as the CM has gone to Delhi and the meeting can be held with the chief secretary," Mr Dallewal told reporters on Tuesday evening.

He said the protesters were not hopeful of getting their issues redressed by meeting a government official.

"It is our warning that if Chief Minister Mann does not hold a meeting with us and resolve our issues by tomorrow, we will be compelled to move ahead further (break barricades to enter Chandigarh)," Mr Dallewal said.

Beginning their march from Gurdwara Amb Sahib, the protesting farmers broke the first layer of barricades as they moved towards the other barriers put up by the Mohali Police near the Chandigarh-Mohali border.

But Mr Dallewal urged the protesters not to break the second layer of barricades and instead begin the protest there peacefully.

"Moving ahead (by breaking barricades) is not a big thing for you. But we will sit here in a peaceful manner," Mr Dallewal said. "We will hold a protest here...It is like the agitation in Delhi." Bharti Kisan Union (Lakhowal) General Secretary Harinder Singh Lakhowal said, "We will win this protest." He said that during their last meeting with the Chief Minister on April 17, they had submitted a charter of 11 demands and Mann had assured them of resolving their issues.

But not a single demand has been accepted yet, Mr Lakhowal claimed.

Another farmer leader said they do want any confrontation with the state government but will head towards Chandigarh tomorrow by breaking the barriers if their issues are not resolved.

After being stopped by the Mohali Police, farmers squatted there while parking their vehicles in the middle of the road. Some of them even started to make tea there.

The police had to divert traffic on the Chandigarh-Mohali road near the YPS Chowk to alternative routes.

AAP's Punjab unit Chief Spokesperson Malvinder Singh Kang said the state government is committed to the welfare of farmers and it will address their genuine demands.

"If the farmer bodies want to hold a dialogue for the farming sector, the doors of the state government are always open," Mr Kang said.