Priyanka Gandhi Vadra Joins Politics, Gets Key UP Post Ahead Of Polls

Lok Sabha elections 2019: Priyanka Gandhi Vadra, 47, has always confined her role in politics to the constituencies of her brother Rahul and mother Sonia Gandhi, Amethi and Raebareli, till now

Priyanka Gandhi Vadra, the sister of Congress president Rahul Gandhi, has finally taken the plunge into politics, just months ahead of the national election due by May. She may contest the Lok Sabha elections from her mother Sonia Gandhi's constituency, Raebareli, Congress sources have said. Often dubbed the "Brahmastra" or the mythical ultimate weapon of the Congress, Priyanka Gandhi Vadra will debut as the party's general secretary in charge of the eastern part of Uttar Pradesh, which pitches her against the ruling BJP's top two mascots, Prime Minister Narendra Modi - whose constituency Varanasi will be in her share - and Chief Minister Yogi Adityanath.

"I have not sent Priyanka and Jyotiraditya for just two months. I have sent them to take the Congress' ideology forward in Uttar Pradesh," Rahul Gandhi told reporters.

47-year-old Priyanka Gandhi Vadra, who reminds many of her grandmother and former prime minister Indira Gandhi, for both her charisma and the stunning likeness, is seen as a natural in politics but she has confined herself to the constituencies of her brother Rahul and mother Sonia Gandhi - Amethi and Raebareli - till now. In national and state elections since 2004, the mother-of-two has campaigned exhaustively in the family seats where the Gandhis enjoy almost royal status.

Sources say her appointment to a key position reflects the Congress's realisation that in a politically vital state like Uttar Pradesh, which has 80 parliamentary seats and is considered the route to power at the centre, the party needs to up its game and cannot afford just one in-charge. It is a huge gamble for the Congress, a sign that the party is all for aggressively taking on PM Modi and the BJP in the coming election.

The Congress dropped the Priyanka bombshell in the third para of a press statement that also announced that Jyotiraditya Scindia will be in charge of western UP. The giant announcement came as Rahul Gandhi began a two-day visit to Amethi. Priyanka Gandhi is in New York and is expected to return on February 1.

Congress leaders say Priyanka Gandhi's arrival in party politics will galvanise the ranks that have been demoralised by the Mayawati-Akhilesh Yadav move to form an alliance in UP for the national election without the Congress, which has been pitching for a grand opposition alliance to take on the BJP.

Rahul Gandhi commented that the BJP was "panicking".

The ruling party has been repeatedly targeting Priyanka Gandhi's husband Robert Vadra, a businessman being investigated for allegedly corrupt land deals in Haryana and Rajasthan. Robert Vadra congratulated his wife in a Facebook post: "Congratulations P... always by your side in every phase of your life." 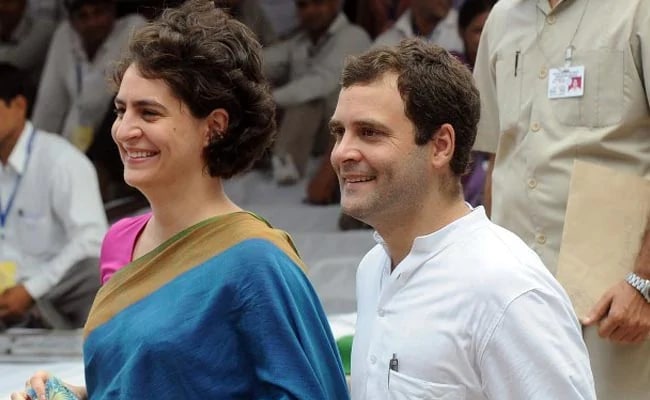 In national and state elections since 2004, Priyanka Gandhi Vadra has campaigned in the family seats where the Gandhis enjoy almost royal status.

Priyanka Gandhi was always active in decision-making and played a key role in the alliance with Akhilesh Yadav's Samajwadi Party in the 2017 Uttar Pradesh election. She also reportedly oversaw the party meeting in which her older brother was crowned Congress president.

The BJP shrugged off the Congress announcement. "Rahul Gandhi failed so they need Priyanka as a crutch. Can't they find anyone beyond that family?" sneered BJP spokesperson Sambit Patra.