Priyanka Gandhi Pitched Against PM, Yogi Adityanath In Their Own Backyard

Priyanka Gandhi Vadra had so far campaigned for the Congress in Amethi and Raebareli, the constituencies of Rahul and Sonia Gandhi 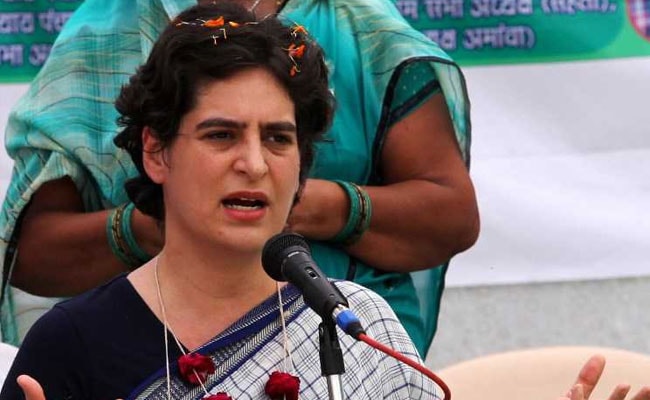 Priyanka Gandhi Vadra has been made the in-charge of the Congress in Eastern UP. (AFP photo)

Priyanka Gandhi Vadra, considered for long the "trump card" of the Congress, was launched into active politics today from Uttar Pradesh, a state that's considered the gateway to Delhi. While the state, with its 80 seats, is seen as the biggest battleground, the youngest Gandhi has been pitched into its thickest.

Eastern Uttar Pradesh is represented by the BJP's two biggest mascots - Prime Minister Narendra Modi, who has his constituency in Varanasi and Chief Minister Yogi Adityanath, who considers Gorakhpur his political home. The party holds 70 of the state's 80 seats.

The saffron-robed Chief Minister, who heads the Gorakhpur math, was also the five-time winner of the Gorakhpur Lok Sabha constituency, which fell to the combined forces of Mayawati and Samajwadi chief Akhilesh Yadav last year.

But that is of no advantage to the Congress, which holds only two of the 40 Lok Sabha seats in the area - Amethi and Raebareli. Moreover, Mayawati and Akhilesh Yadav announced their alliance earlier this month, leaving out the Congress.

The Team Mayawati - an alliance of the Dalit leader, Samajwadi chief Akhilesh Yadav and Rashtriya Lok Dal chief Ajit Singh -- are busy carving out the state among themselves. Only two seats - Rahul Gandhi's Amethi and Sonia Gandhi's Rae Bareli -- have been spared by the combine. With the Congress holding only two seats in the state, Mayawati said the party cannot even transfer votes and is not useful to the alliance.

The move has demoralized the state's Congress workers, who were expecting the party to play a key part in alliance, especially in the aftermath of its victory in the heartland states of Rajasthan, Madhya Pradesh and Chhattisgarh in December.

The Congress leaders expect Priyanka Gandhi's entry would put heart in them. "Priyanka laao Congress bachao" (Get Priyanka and save the Congress) has long been a slogan of the party workers, who have a special regard for the younger Gandhi for her resemblance, both in looks and charisma, to her grandmother, former Prime Minister Indira Gandhi.

Priyanka Gandhi's entry to active politics is also expected to have spin-offs in the rest of the state, which is the biggest chunk of the Hindi heartland. The Congress already has Rajasthan, Madhya Pradesh and Chhattisgarh under its belt.

Priyanka Gandhi's earlier involvement in the elections in her family boroughs of Amethi and Raebareli, however, has not yielded sterling results. While the Congress managed to retain both Lok Sabha seats, it lost a majority of the 10 assembly seats that come in that area. In 2014, Rahul Gandhi retained Amethi with a much smaller margin.

''The biggest challenge [for Priyanka Gandhi Vadra] is to restore the base of the Congress which went away to various parties,'' senior party leader and Madhya Pradesh Chief Minister Kamal Nath said.

"The Congress vote got splintered into many parties.  And now, to bring these voters back into the Congress from other parties is going to be the challenge," he added.