"Practice Restraint": The Appeal To India, Pakistan From Around The World

Among those who have appealed for resumption of peace talks are Russia, China, France, United Kingdom and the United States, besides neighbours such as Sri Lanka and Nepal. 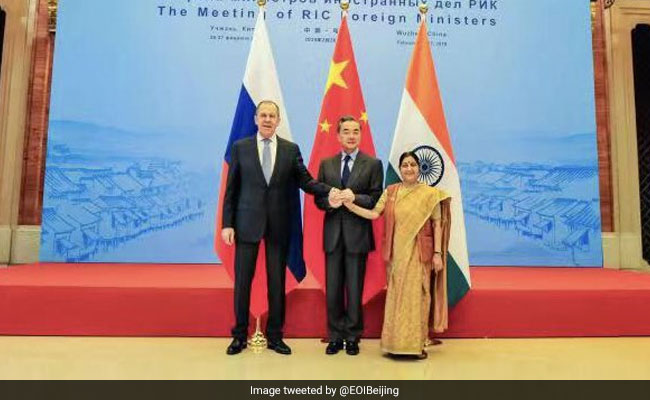 The foreign ministers of India, Russia and China condemned terrorism at the Wuzhen trilateral meet.

Several countries across the globe have called for restraint in the light of escalating tension between India and Pakistan since Tuesday morning, when Air Force fighter jets crossed its neighbour's border to strike at a terror camp in Balakot. Among those who have appealed for resumption of peace talks are Russia, China, France, United Kingdom and the United States, besides countries in the immediate neighbourhood such as Sri Lanka and Nepal. The European Union has also weighed in with similar advice.

Russia, in its statement, called on both sides to "show restraint and step up efforts to resolve existing problems" through political and diplomatic means. Expressing serious concern over the aggravating situation along the India-Pakistan border, it said: "We are ready to further assist in strengthening the counter-terrorism potential of New Delhi and Islamabad."

Significantly, this appeal came a few hours after the foreign minister of Russia joined his counterparts from China and India at the Wuzhen trilateral meet in releasing a joint statement to demand that "those committing, orchestrating, inciting or supporting terrorist acts be held accountable and brought to justice".

Chinese Foreign Ministry spokesperson Lu Kang expressed hope that both India and Pakistan will show restraint, keeping in mind the peace and stability of the region. "We hope they can enhance their dialogue with fundamental interests in mind, and avoid taking any action that may further deteriorate the situation," he said. At the trilateral meet, Chinese Foreign Minister Wang Yi had described his country as a "mutual friend of India and Pakistan" and urged the two to launch bilateral talks.

Both Nepal and Sri Lanka said they were concerned by the developments in their neighbourhood, and underlined the "importance of peace and stability in South Asia". "As the current Chair of SAARC, Nepal... urges them to seek a solution through dialogue and peaceful means in order to ease tension and normalise the situation," a statement from Kathmandu read.

United States Secretary of State Mike Pompeo also "encouraged" both the countries to avoid escalation, but in his conversation with Pakistani Foreign Minister Shah Mehmood Qureshi, placed particular stress on the "urgency of Pakistan taking meaningful action against terrorist groups operating on its soil".

France called for restraint from both countries too, but backed India's "legitimacy to ensure its security" from external agents. It also asked Pakistan take swift action against "terrorist groups established on its territory".

The European Union (EU) pushed for peace in the subcontinent, telling India and Pakistan to understand the "dangerous consequences" that further escalation in tensions could have for the entire region. "The resumption of diplomatic contacts at the political level and implementation of urgent measures by both sides is vital," said EU Commission Vice President Federica Mogherini.