At a trilateral meeting in Wuzhen, China used very strong terms to say that "those committing, orchestrating, inciting or supporting terrorist acts must be brought to justice". 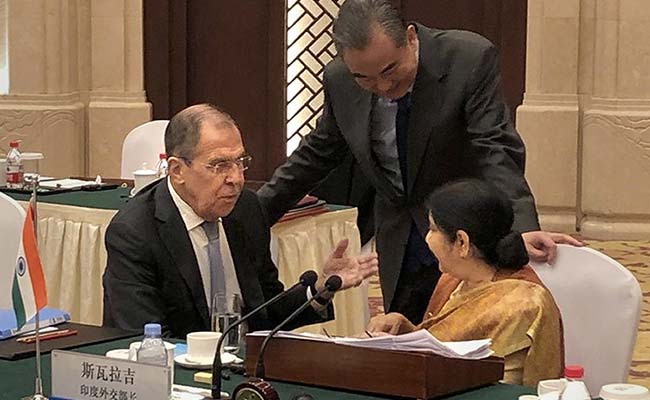 The ministers said that states and their agencies should play a central role in combating terror.

In what can be seen as a diplomatic victory for New Delhi, China today supported India's stand on Pakistan-based terrorism and said that terror groups cannot be used to promote a country's political and geopolitical goals.

China used very strong terms to say that "those committing, orchestrating, inciting or supporting terrorist acts must be held accountable and brought to justice". This is a significant development, given that Beijing has repeatedly blocked India's attempts to get Jaish-e-Mohammed (JeM) chief Masood Azhar listed as a global terrorist at the United Nations.

A joint communique issued by Russia, India and China at their 16th trilateral meeting in Wuzhen stated: "The (foreign) ministers strongly condemned terrorism in all forms and manifestations. They called on the international community to strengthen the United Nations-led global counter-terrorism cooperation by fully implementing relevant United Nations Security Council (UNSC) resolutions and the Global Counter-Terrorism Strategy in accordance with the United Nations charter and the principles of international law while respecting sovereignty and independence of all states, and expeditiously finalising and adopting the UN Comprehensive Convention on International Terrorism at the earliest."

In the joint communique, the three external affairs ministers said that states and their competent agencies should play a central role in both national and international counter-terrorism efforts. "They also stressed that terrorist groups cannot be supported and used in political and geopolitical goals," it added.

The ministers demanded in the joint communique that those committing, orchestrating, inciting or supporting terrorist acts be held accountable and brought to justice in accordance with existing norms. Addressing the threat of chemical and biological terrorism, the communique read: "They (the three foreign ministers) supported and emphasised the need for launching multilateral negotiations on an international convention for the suppression of acts of chemical and biological terrorism within the Conference on Disarmament."

China, however, tempered its statement by adding that Pakistan "has always been opposed" to terrorism. "As a mutual friend of both countries, we hope that they can conduct a dialogue and establish facts through investigation to keep things under control and maintain peace and stability in the region," said Mr Yi.

Beijing had reacted to India's air strike on Balakot yesterday morning in a conciliatory manner. "We hope that both India and Pakistan can exercise restraint and adopt actions that will help stabilise the situation in the region and improve mutual relations," news agency PTI quoted China's foreign ministry spokesman Lu Kang as saying. But hostilities only increased today, with Pakistan sending its jets across the border in retaliatory action.