Dr Bimlesh Yadav, State Vice President of Yuva RJD, who is seen offering flowers at a Shivaling near the couple was given credit for the poster 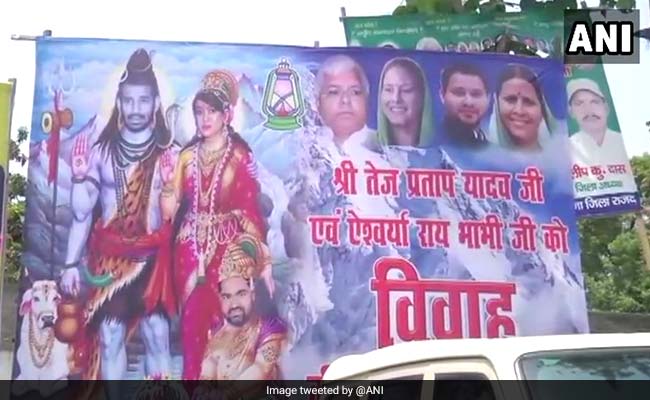 The Yadav family accompanied Tej Pratap as Shiva and Aishwarya as Parvati on the poster.

Patna: A day before Lalu Yadav's eldest son Tej Pratap tied the knot with the daughter of his father's colleague, their little love story got a mythological spin. Posters starring Tej Pratap as Lord Shiva and his then-fiancee Aishwarya Roy as Parvati sprung up outside the Yadavs' residence at 10, Circular Road.

As a chiselled Shiva, Tej Pratap has a snake around his neck and is holding a stoup (kamandal). His consort Aishwarya as Parvati draped in a red sari is standing next to him. The poster also has mugshots of Lalu Yadav, Tej's mother Rabri Devi, his sister Misa Bharti and brother Tejashwi.

Dr Bimlesh Yadav, State Vice President of Yuva Rashtriya Janata Dal, who is seen offering flowers at a Shivaling in the foreground was given credit for the poster in the footnote.

Twitter, however, was unforgiving and comments such as, "Freedom of Expression self-styled seculars way?", "Intelligence has a limit but stupidity is infinite", "What was Lord Shiva's mistake", "Shiv ji and Parvati ji aren't symbols of corruption", and "secular or peculiar" followed.

After a grand party to celebrate Tej Pratap and Aishwarya's engagement a few days ago, their wedding celebrations were even grander. A member of the Yadav household said the guest list ran into several thousand and included top political leaders from across the country.

Lalu Yadav, who couldn't be part of the ceremony as he is serving jail-term for fodder scam in the 90s, reached home on Saturday to bless the bride and groom. Not only did he get a three-day parole to attend the wedding, he also managed bail for six weeks citing medical reasons.

His homecoming in the middle of the wedding celebrations doubled the family's happiness and 30-year-old Tej Pratap dancing with Tejashwi, former Bihar deputy chief minister, in a viral video of the pre-wedding functions was a proof.

At the veterinary college grounds in Patna, the wedding venue, Tej Pratap and Aishwarya exchanged vows in a well-attended ceremony. Among the VIPs were Bihar Chief Minister Nitish Kumar, who set aside political differences, and congratulated the couple.

While Tej Pratap wore an ivory sherwani and completed the look with a gold safa, Aishwarya looked pretty in a red lehenga.

Bihar Deputy Chief Minister Sushil Kumar Modi, the senior BJP leader who played an instrumental role in getting the central agencies to probe Lalu Yadav, Tej Pratap, Tejashwi and Misra Bharti in corruption cases, however, gave it a miss. He is reportedly out of the country.

Promoted
Listen to the latest songs, only on JioSaavn.com
Tej Pratap Yadav, the eldest of the nine siblings, is a first-time lawmaker and was health minister until last July, when Nitish Kumar dumped the RJD and formed a new government with the BJP.

Aishwarya's mother Chandrika Roy, is a six-time Rashtriya Janata Dal (RJD) lawmaker and has been a cabinet colleague of Lalu Yadav in many governments.
Comments
Tej Pratap weddingshiv parvati postertej pratap as shiva