PM Narendra Modi was speaking at the rally after inaugurating three mega projects, including an AIIMS and the fertiliser plant, in Gorakhpur. The other project he inaugurated is a Regional Medical Research Centre of the Indian Council of Medical Research (ICMR). 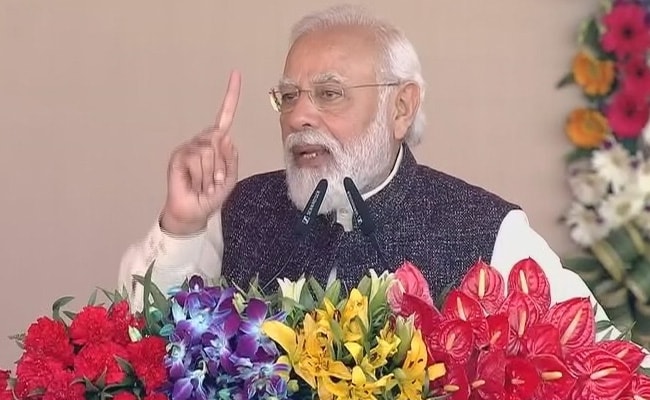 Before 2014, the country was known for importing urea, and the shortage of fertilisers used to make headlines, but the situation has improved now, Prime Minister Narendra Modi said on Tuesday as he inaugurated a fertiliser plant in UP's Gorakhpur.

Addressing a rally in Uttar Pradesh Chief Minister Yogi Adityanath's home turf Gorakhpur ahead of the assembly elections in the state, PM Modi said his government stopped misuse of urea, and issued soil health cards to farmers so that they know which type of fertiliser is needed.

He said the amount of sugarcane dues paid by the Yogi Adityanath government in four and a half years is more than the total sum paid by the previous governments in the state in 10 years.

PM Modi was speaking at the rally after inaugurating three mega projects, including an AIIMS and the fertiliser plant, in Gorakhpur.

The three big-ticket projects are worth over Rs 9,600 crore.

The newly built fertiliser plant will be operated by the Hindustan Urvarak Rasayan Limited (HURL).

The Gorakhpur AIIMS, built at a cost of Rs 1,011 crore, will benefit not only the people of eastern Uttar Pradesh but also a huge population of Bihar, Jharkhand and Nepal with its world-class health facilities, officials said.

Similarly, the regional medical research centre set up at a cost of Rs 36 crore will facilitate the test and research of vector-borne diseases, they added.

The hi-tech lab will decrease the dependency of the area on big cities for tests related to vector-borne diseases.