"The Rajya Sabha is about checks and balances. This is absolutely essential for our democracy. Debates have to be many and effective. But there is also a difference between checking and clogging (and between) balance and blocking," PM Modi said. 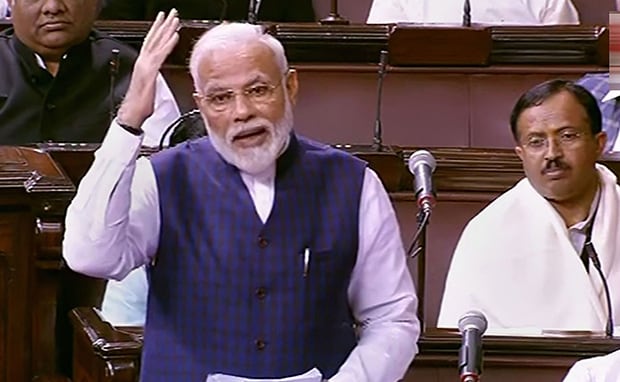 Rajya Sabha's landmark 250th session started on Monday with the ruling BJP and the opposition sparring over its functioning as Prime Minister Narendra Modi sought to draw a distinction between checking and clogging, while his predecessor Manmohan Singh raised red flags over undermining the role of the Upper House.

While opposition parties charged the BJP of bypassing the Rajya Sabha by bringing crucial legislations as "money bills", which did not require the approval of the Upper House, members of the party hit back at them over disruptions.

Speaking on a special discussion on the "Role of Rajya Sabha in Indian Polity and Need for Reforms", PM Modi praised the Nationalist Congress Party (NCP), which has emerged as the kingmaker in Maharashtra, and the Biju Janata Dal (BJD) for never rushing to the well of the House to raise their issues and yet highlighting their points effectively.

"The Rajya Sabha is about checks and balances. This is absolutely essential for our democracy. Debates have to be many and effective. But there is also a difference between checking and clogging (and between) balance and blocking," he said.

With some within the ruling party questioning the effectiveness of the Rajya Sabha as crucial legislative work got stalled because the BJP-led NDA lacked a majority in the House, PM Modi recalled the then prime minister Atal Bihari Vajpayee's words that the Upper House "may be the second house but no one should think of it as a secondary house".

"Today, I echo the sentiments of Atalji and add that the Rajya Sabha must be a vibrant supportive House for national progress," he said, adding that the makers of the Constitution had envisioned a bicameral legislative framework and this vision had enriched the democracy.

Speaking immediately after him, Dr Singh said the role of the Upper House must not be undermined and it should be allowed more time to study and debate bills.

"In the 16th Lok Sabha, only 25 per cent bills were referred to the committees as compared to the 15th and the 14th Lok Sabha. Regardless of what the other House does, it is crucial for our House to form select committees to ensure that the bills received go through a detailed scrutiny," he said.

The former prime minister said misuse of money bill provisions should be avoided.

"We have seen instances of misuse of money bill provisions by the executive, leading to the bypassing of the Rajya Sabha on important matters. Those on the treasury benches must ensure that this is avoided," he said.

The Congress leader said the Rajya Sabha was a council of states and hence, it was all the more important that its voice was heard on the crucial issues of the day.

"Converting Jammu and Kashmir to a Union territory has far-reaching consequences. The government should consult the council of states before such drastic measures can be considered by the House," he said.

Referring to disruptions and unruly behaviour of the members, Chairman M Venkaiah Naidu said over the last two years, he had voiced concerns over the functioning of the House.

He urged all members to do some soul searching, because "all is not well" as far as meeting people's expectations was concerned.

Mr Naidu also regretted members not attending the meetings of the parliamentary committees.

Congress leader and Deputy Leader of Opposition in the Rajya Sabha Anand Sharma said now bills were being sent to the select committees after demands from the opposition.

Samajwadi Party's Ram Gopal Yadav called for a higher representation of the smaller states in the Upper House, suggesting that at least six members must represent a state in the Rajya Sabha, no matter how small it was, citing the example of the north-east.