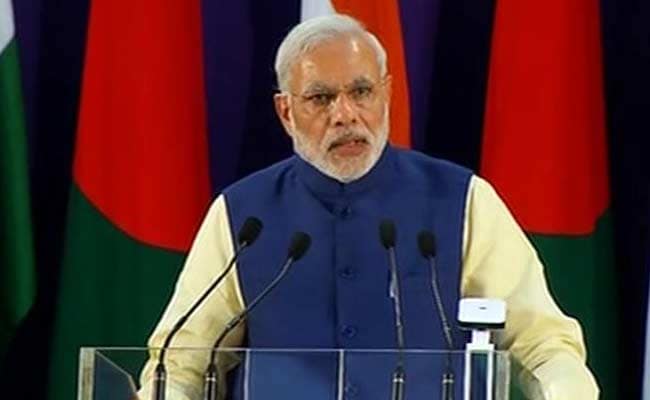 The Prime Minister's sharp criticism came during the course of his address at the Bangabandhu International Convention Centre in Dhaka when he vowed to jointly combat with Bangladesh terrorism in the region.

Recalling that 90,000 Pakistani prisoners of war were in India's captivity during the 1971 Bangladesh Liberation War, PM Modi said, "if we had a diabolic mindset, we don't know then what decision we would have taken."

"Terrorism has no boundaries. India has been troubled by it for the last 40 years. So many innocent people have died and what did those associated with terrorism gain and what have they given to the world... terrorism has no values, no principles, no traditions and it has only one motive and that is enmity against humanity," he said.

A Joint Declaration issued on the last day of PM Modi's maiden two-day visit to Bangladesh reaffirmed the two countries' "unequivocal and uncompromising position against extremism and terrorism in all forms and manifestations."

The two sides also committed to cooperate with each other by sharing information about groups and persons indulging in terrorism.

"They reiterated their commitment that their respective territories would not be allowed to be used for any activity inimical to the other," the declaration said.

In his address, the Prime Minister came out strongly against expansionism, saying there is no place for it in today's world.

"The World has changed, there was a time when may be expansionism was used to be the symbol of a country's power as to which one is expanding how much and reaching which place...but times have changed. Now in this era there is no place for expansionism and the world wants development not expansionism and this is the basic vision."