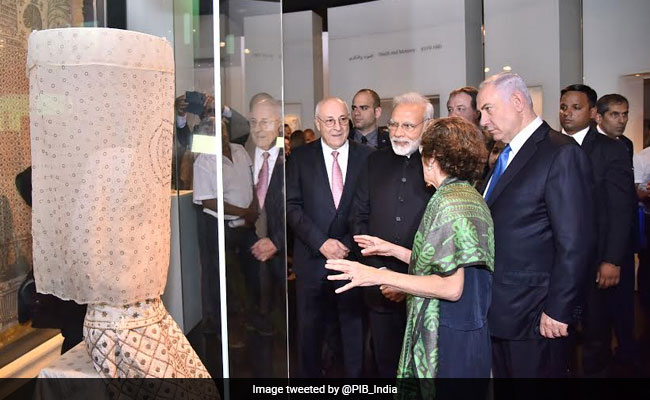 New Delhi: Prime Minister Narendra Modi who is on a three-day visit to Israel today visited the Israel Museum in Jerusalem along with Israeli counterpart Benjamin Netanyahu.

The first stop was at the gallery which displayed religious and secular material culture of the Jewish community in Cochin (Kochi) in Kerala, where one of the exhibits was a bridal dress, which was later inserted in a Torah ark curtain used on Yom Kippur.

The leaders also saw a set of Torah Scrolls in Silver casings which were earlier displayed in the Magen David synagogue during Simhat Torah in Calcutta.

However, the highlight of the tour was the replica of the Kadavumbagam synagogue from the town of Cochin, built in the 16th century. Its wooden structures, with a carved and painted ceiling and the ornate altar are placed in a room. The main wooden structure was brought in from the original synagogue.

Two traditional Indian-Jewish singers were present to sing Jewish hymns during the visit. The synagogue has an exquisitely carved wooden structure and a painted ceiling.

Promoted
Listen to the latest songs, only on JioSaavn.com
The section is divided into two parts - the upper level from where women took part in prayers and the lower level. Cochin synagogues are distinct from the rest, as sections for men and women are not separated by a curtain.

PM Modi arrived in Israel on Tuesday, the first ever visit by an Indian Prime Minister to the country in 70 years.