PM Narendra Modi at UN said: "India's great diplomat, Acharya Chanakya said centuries ago- When the right work is not done at the right time, then only time destroys the success of that work." 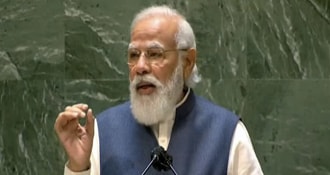 While mentioning Chanakya, PM Narendra Modi said: "India's great diplomat, Acharya Chanakya said centuries ago- When the right work is not done at the right time, then only time destroys the success of that work."

The Prime Minister said if the United Nations has to keep itself relevant, it has to improve its effectiveness, increase its reliability.

He also stressed the need to strengthen the UN to protect the "Global Order, Global Laws and Global Values."

PM Modi called on the international community to speak in unison to strengthen the rule-based world order.

The Prime Minister ended his speech quoting the words of Nobel laureate, Rabindranath Tagore "move forward fearlessly on your auspicious path of action. May all weaknesses and doubts be eliminated".

PM Modi said, "This message is as relevant for the United Nations in today's context as it is relevant for every responsible country. I believe, the efforts of all of us, will increase peace and harmony in the world, make the world healthy, safe and prosperous."

PM Modi on Saturday left New York for India on completion of his three-day visit to the United States during which he held bilateral meetings and addressed the UN General Assembly.

Many Challenges As Tata Draws Up Flight Plan For Air India