World leaders including Bangladesh Prime Minister Sheikh Hasina and President of South Korea Moon-Jae-in were also present for the occasion in New York. 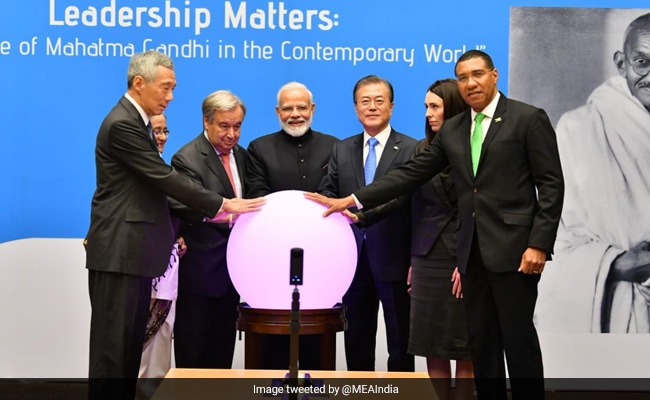 Prime Minister Narendra Modi on Tuesday (local time) inaugurated a 50 kilowatt ''Gandhi Solar Park'' at the Headquarters of the United Nations in New York, on the second leg of his visit to the United States.

World leaders including Bangladesh Prime Minister Sheikh Hasina and President of South Korea Moon-Jae-in were also present for the occasion in New York.

The event was hosted to celebrate the 150th Birth Anniversary of Mahatma Gandhi, which will underline the continuing relevance of Gandhian thoughts and values in today's world.

Several Heads of State and Government along with UN Secretary-General Antonio Guterres will grace the occasion to pay our collective tribute to Gandhiji and underscore the significance of his message.

Prime Minister Modi is also scheduled to inaugurate a Gandhi Peace Garden at the State University of New York Campus at Old Westbury in Long Island where 150 trees have been planted in honour of Mahatma Gandhi's 150th birth anniversary.

Previously, PM Modi has held several bilateral and multilateral meetings with leaders from other countries and UN entities on the margins of the UN General Assembly.

PM Modi participated in string of events, including addressing the mega Howdy Modi! event in Houston, the UN Climate Action Summit in New York and a high-level meeting on the health sector.

He has also held bilaterals with the USA, Italy, Niger and Qatar and met leaders from Bhutan, Germany and Netherlands -- to name a few -- on the sidelines of his UN engagements. The Prime Minister also held a series of pull-asides with countries like Jordan, Indonesia and Luxembourg on Monday.