PM Modi referred to the capital punishment awarded recently to two men for raping and brutalising a minor girl in Mandsaur in Madhya Pradesh. 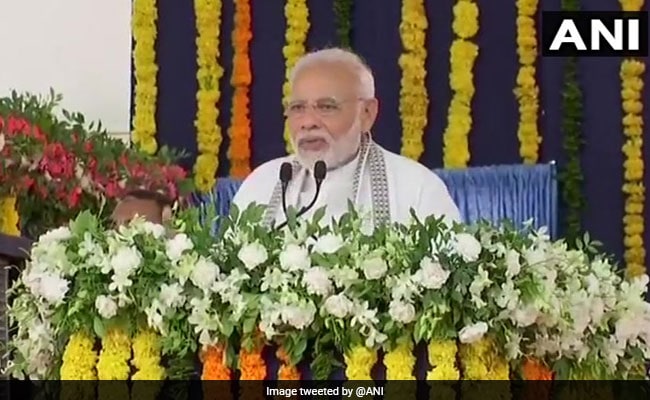 PM Modi said technology should be used to the maximum to ensure speedy delivery of justice.(File)

He said the central government had approved the DNA Technology (Use and Application) Regulation Bill, 2018 in view of the importance of DNA technology in forensic investigation.

"I call upon forensic experts to help the judiciary by using DNA profiling as much as possible so that culprits of brutal rape cases are punished immediately and the victims get justice," PM Modi said while addressing the 4th convocation ceremony of the Gujarat Forensic Sciences University (GFSU).

During his speech, PM Modi referred to the capital punishment awarded by a sessions court recently to two men for raping and brutalising a minor girl in Mandsaur in Madhya Pradesh.

"You saw recently that in Mandsaur rape case, the court completed hearing and pronounced the verdict against two demons in a short span of two months. Same thing has happened in some other cases in MP and Rajasthan as well," PM Modi said.

He said technology should be used to the maximum extent to ensure speedy delivery of justice.

"In order to deal with rapidly changing crime scenario, you also have to develop newer techniques to ensure that criminals are not spared," the prime minister said.

He said criminals and their ways of committing crime are constantly changing.

"The criminals should fear that they will be caught by law. This fear also acts as a deterrent," PM Modi said. He also advised the graduating students not to discount human intelligence in cracking crimes.

Citing example of the 'Pagi' community members who live in border areas of Gujarat and Rajasthan, the prime minister said, "By looking at the footprints of camels who have crossed over, members of this community can say if anyone was riding the camel or whether it was laden with goods. They are trained from childhood".

PM Modi said forensic science, the police and the judiciary are three important pillars to ensure criminal justice delivery system, so that citizens feel safe and the crime is kept under check. He said Gujarat had adopted a holistic approach in developing these three areas.

"Establishment of the Raksha Shakti University, the National Law University and the Gujarat Forensic Sciences University are steps taken in this direction," he said.

It is a matter of pride that the GFSU achieved such a benchmark of academic excellence in short time wherein it was awarded "A" grade by the National Assessment and Accreditation Council, the PM Modi said.

Invoking Swami Vivekananda, PM Modi said the spiritual leader used to say that each soul is potentially divine. "Each one of us has tremendous strength that is waiting to be explored. The first step towards manifesting this strength is to believe in oneself," he said.

PM Modi said, "Believe in yourself. Believe in your abilities. Your education and intelligence has trained you to think out of the box. Ensure that you use these skills not only to keep pace with the changes around us, but also to drive progressive changes that make our world a better place. Generations to come will thank you for it."

The Union Cabinet had last month approved the DNA Technology (Use and Application) Regulation Bill 2018, which is aimed at expanding the application of DNA-based forensic technologies to support and strengthen the justice delivery system of the country.

"In view of the importance of DNA technology in forensic investigation, my government has approved this bill. The aim of the bill is to ensure that all DNA tests remain reliable and the data remains safe," PM Modi said.

On the occasion, PM Modi congratulated the GFSU for becoming popular at the national and international level in a short span of time.

"You have trained police forces and forensic experts of many nations," PM Modi said.Diplomats of around 20 countries attended the ceremony.

GFSU Director General JM Vyas said it was Prime Minister Modi who had mooted the idea of setting up a forensic university in Gujarat.

PM Modi had inaugurated the varsity when he was chief minister of Gujarat in 2011, he said.

A total of 517 students graduated this year from the GFSU. Some of them received certificates and medals at the hands of the prime minister at the function.