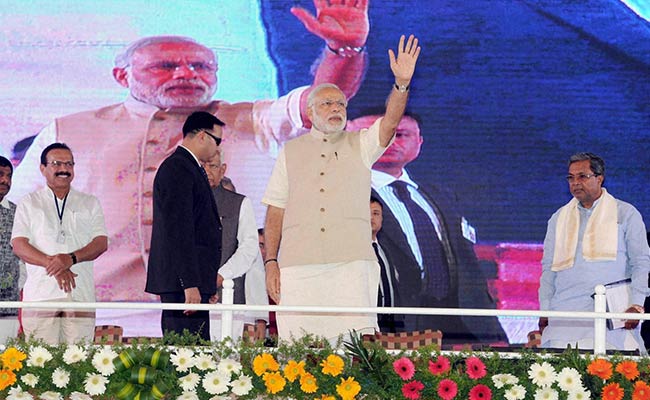 Prime Minister Narendra Modi at the 21st INCOFYRA (International Conference on Frontiers in Yoga Research and its Applications), in Bengaluru on Sunday, Jnauary 3, 2016. (Press Trust of India photo)

Bengaluru: Prime Minister Narendra Modi today pitched for integrating Yoga and traditional Indian medicine more closely into the health care system and make wellness a part of life for all in India and rest of the world.

Inaugurating an "International Conference on Frontiers in Yoga Research and its Applications" at Jigani, about 30 km from Bengaluru, he asked health professionals, policy makers, government organisations and industry to bridge the distance between the various forms of medicine systems.

"I hope that you will integrate yoga and traditional Indian medicine more closely into our health care system...," Mr Modi told the gathering at the Vivekananda Yoga Anusandhana Samsthana, a deemed university.

"My vision for health care is an integrated system that understands and builds on the best and most effective of different traditions," the Prime Minister said.

Modern systems of medicine have transformed health care, screening, detection and diagnosis of diseases and use of technology has reduced barriers to accessing health care, and improved our understanding of disease patterns, Mr Modi said.

Breakthroughs in medicines and vaccines have also helped conquer and contain many diseases.

"But, as our understanding of its limitation and its side effects have grown, as we have experienced the growing costs of modern medicine systems, we have begun to look beyond to traditional systems, not just in India, but in other countries as well," Mr Modi said.

"Their popularity is growing. Yoga is now a global heritage. And, the world is embracing traditional Indian medicine with great enthusiasm," he said.

Mr Modi said across cultures and geography, people are increasingly taking to yoga to redefine their lives - to find oneness between their inner self and outer world; between their existence and their environment.
Comments
PM Narendra ModiYogaHealth careIndian medicinePM Modi in Bengaluru