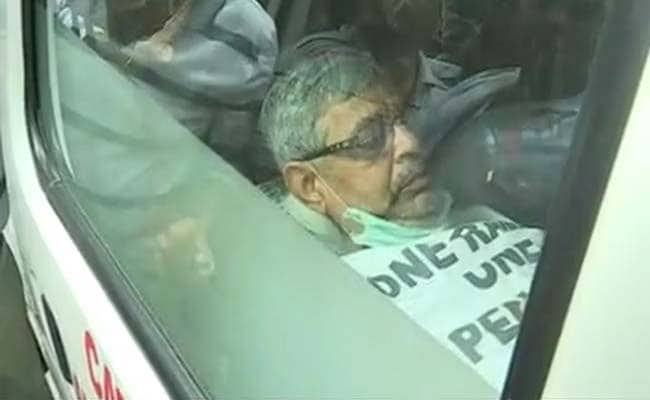 Col (retd) Pushpinder Singh being taken to the hospital.

New Delhi: Prime Minister Narendra Modi is handling One Rank One Pension or OROP himself now and "positive movement" is expected on the issue this week, sources have told NDTV.

There is speculation that an OROP announcement could come as early as Friday, August 28, the 50th anniversary of the 1965 war with Pakistan.

Defence Minister Manohar Parrikar met PM Modi yesterday and sources said only final touches now remain to be given to the new pension plan that the government will announce for ex-serviceman.

OROP, a two-decade old demand for pension parity, was widely expected to be announced by PM Modi in his Independence Day speech on August 15 this year. But it had to be dropped because ex-serviceman and the government failed to agree on when the new package would be effective from.

A protest by veterans at Delhi's Jantar Mantar escalated into a hunger strike by three Army veterans after OROP did not feature in the Prime Minister's list of announcements on Independence Day.

Stepping in to pacify agitating ex-servicemen, the Prime Minister's Office held talks with representatives of the protesters, asking them to give the government 10 more days to iron out differences.

One veteran on hunger strike, Col (retd) Pushpender Singh, was taken to hospital yesterday after he took ill.

Ten former service chiefs wrote to Prime Minister Modi last week expressing "dismay" at the government's handling of OROP and urging it to "settle this issue expeditiously and in an urgent time frame."

The veterans have repeatedly reminded PM Modi that OROP was one of his key promises in the run-up to the national election last year.

OROP is expected to benefit more than three million retired servicemen. It will give equal pension to servicemen retiring at the same rank regardless of when they retire. At present, a soldier who retired many years ago is paid far less than someone several ranks junior to him retiring now.