Peace Will Not Return With Guns But Dialogue, Says Mufti Mohammad Sayeed 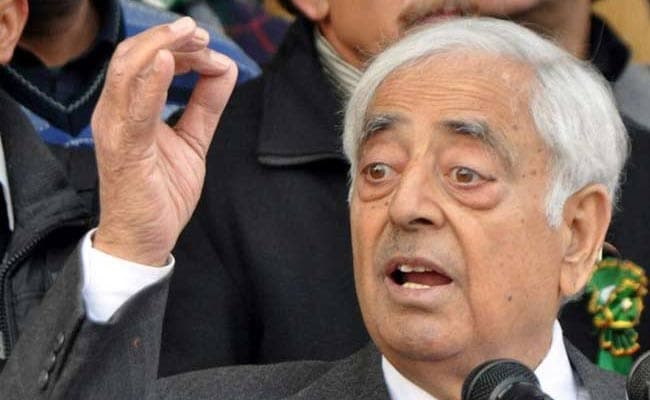 Srinagar: Jammu and Kashmir Chief Minister Mufti Mohammad Sayeed today said Islam's message of peace was too loud to be lost in the din of violence perpetrated by some people in its noble name.

"Islam's message of peace is too loud to be lost in the din of violence perpetrated by some people in its noble name. Peace will not return with guns but dialogue.

"Innocent people in Syria, Iraq and Yemen are fleeing and taking shelter in Europe to escape bloodshed in their countries. Leaders like Chancellor of Germany and Prime Minister of England are taking a lead to provide succour to the refugees who are in a despicable condition," Mr Sayeed said.

The Chief Minister was addressing people after inaugurating South Kashmir Sports Festival at Government Degree College for Boys in Anantnag.

Mr Sayeed vowed to end political instability in the state and restore people's honour and dignity, saying he had a vision for equitable development of all the three regions of the state.

"I vow to end political instability of 70 long years in the state and restore people's honour and dignity. I enjoy the faith and confidence of people in taking Jammu and Kashmir forward on the path of peace and development," he said.

The Chief Minister said he has a big vision for J-K which would see equitable development of all the three regions of the state.

"We will practically demonstrate our resolve to improve communication network, education, health, rural and urban development," he said.

Mr Sayeed promised people to annihilate distances and give them their rights.

"Jammu and Kashmir was just like a locked jail with no keys in sight when I took over (for first term as chief minister) in 2002.

"We build roads, strengthened institutions and encouraged people-to-people contact, including confidence building measures across the LoC (Line of Control). I promise to take forward that agenda again," he said.

Advocating opening of more cross-LoC points to take trade and travel beyond divided families, the Chief Minister said he travelled to Kaman Post and Salamabad twice to convey his message of peace so that stability returns to the region.
"I have promised to make Uri (near LoC in north Kashmir) a smart town and will soon visit Chakan da Bagh, in Poonch, to take firsthand appraisal of the cross-LoC trade and travel there. My thought is the thought of the people of Jammu and Kashmir.

"I have no yearning for power. I want to bring a positive change and give people their right and restore the glory of this wonderful state," he said.

Reiterating his commitment to compensate each and every flood victim, the Chief Minister said the Centre has to realise what people have gone through during last year's deluge that left behind a trail of death and destruction.

"It is a herculean (task) to restore the public and private infrastructure that was damaged in the September floods. Our focus will be on reconstructing the houses that were fully damaged in the floods and reviving the business activities of our people," he said.

The Chief Minister said the rehabilitation and restoration is an ongoing process and the Government is utilising all resources at its disposal, including the World Bank assistance of Rs 1500 crore, till special package from the Centre arrives.

The Chief Minister said it is the responsibility of the state to ensure optimum utilisation of funds allocated under Centrally-Sponsored Schemes amounting to Rs 6,000 crore.

"We have to build our capacities to be able to expend these funds in full, which would be a great achievement for the state," he said.