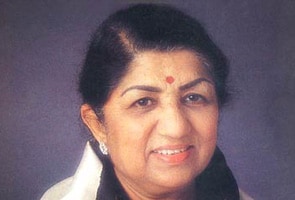 Mumbai: It is a song that is sung on every patriotic occasion, had moved India's first prime minister, Jawaharlal Nehru, to tears and its strong morale-boosting words provided solace to a nation agonized by the defeat in the 1962 India-China war.

"Ae Mere Watan Ke Logon" (O people of my land), penned by National Poet Pradeep, was written shortly after the war and served to unite the masses who were seething with rage over the battering the Indian forces received.

"Ae Mere Watan Ke Logon", perhaps revered next only to the National Anthem ("Jana Gana Mana") and the National Song ("Vande Mataram"), as also "Saare Jahan Se Aacha", was first rendered before a packed National Stadium in the capital on a cold January 27 evening exactly 50 years ago - by Lata Mangeshkar.

"Unfortunately, Mr Pradeep was not invited. When Mr Nehru visited Mumbai three months later - on March 21, 1963 - my father sang it specially for him at a function at R.M. High School here and also presented the original handwritten poem to him," the artist's daughter Mitul said.

A tribute to the war heroes and martyrs, the song enabled the young and the old to control and overcome the anger of defeat. Its popularity continues unabated after 50 years - and remains a "must play" at all major national celebrations and events.

There's an interesting story behind the song's origin.

Mr Pradeep, who was as despondent as every other Indian after the 1962 war, was walking the Mahim beach in Mumbai when the words suddenly came to him. He borrowed a pen from a fellow walker, ripped out the foil from his cigarette packet and penned the first stanza: "Ae Mere Watan Ke Logon/Aankhon Me Bhar Lo Paani/Jo Shaheed Huei Hai Unki/Zara Yaad Karo Kurbani".

Some weeks later producer Mehboob Khan approached him for an opening song for a fund-raiser he was organising at the Nation Stadium. Mr Pradeep said he would do so but would not reveal any details. He then roped in Lata Mangeshkar and music director C. Ramchandra and the rest, as they say, is history.

"Due to some misunderstanding between Ramchandra and Lata-didi, it was to be sung by Asha Bhosale. However, my father felt nobody except Lata-didi could do justice to it. He even personally convinced her and she agreed to sing it. But with a rider - Mr Pradeep must be present at the rehearsals!"

Mr Pradeep, (whose 98th birth anniversary will be observed next month), was born Ramchandra Narayanji Dwivedi on Feb. 6, 1915 in Badnagar (near Ujjain) in what is now Madhya Pradesh.

From his early days, Mr Dwivedi displayed a patriotic fervor which continued in college and in later life. He penned around 1,700 poems and songs for 72 movies.

"Nobody can make you patriotic," It's in your blood. It is how you bring it out to serve the country that makes you different," Mr Pradeep once told this writer in 1987 during a free-wheeling interview at his Vile Parle bungalow.

After graduating in 1939, he became a teacher, but continued his passion - writing and singing poems at various concerts and programs, adopting the pen-name 'Pradeep' (Light). At one such function in Mumbai, he was offered his first film, "Kangan" (1939) as a lyricist.

However, it was a patriotic song in "Bandhan" (1940), "Chal Chal Re Naujawan," which became hugely popular and he was widely noticed as the freedom movement was just cresting.

Three years later, "Door Hato Ae Duniyawalon", a nationalistic song in "Kismet" catapulted him to national fame. Though strict British censors innocently cleared it, belated realization dawned on the song's implications. "They promptly ordered his arrest and he went underground for a year," Mitul said.

Since "Bandhan", Mr Pradeep never looked back, and like a patriotic soldier armed with a pen, he continued raising the nationalist fervor among the masses with his songs.

Mitul (56) and elder sister Sargam (66) proudly recall that in those days, audiences all over used to demand encores as Mr Pradeep's songs were played in cinemas and the projectionists used to repeatedly rewind them.

By the mid-1960s, as the country slowly progressed, patriotic songs were edged out by fast, pacy, disco numbers both in the Hindi film industry and in poetry.

On the wane, Mr Pradeep suddenly bounced back onto the central stage with Subodh Mukherji's "Sambandh" (1969), giving superhit numbers in tune with the audiences' likings - including the immortal "Chal Akela, Chal Akela, Tera Mela Peechhe Chhoota" rendered by Mukesh to O.P. Nayyar's music.

In 1975, he achieved a second peak in his career with "Jai Santoshi Maa" and his title number, "Main To Aarti Utaroon Re, Santoshi Mata Ki" becoming a religious rage in the country and broke all records.

Promoted
Listen to the latest songs, only on JioSaavn.com
In 1958, music giant HMV released an album with 13 of Mr Pradeep's patriotic numbers and he was conferred the title of Rashtra Kavi (National Poet).

He later became Kavi Pradeep and was showered with honours and awards, including the Dadasaheb Phalke Award-1997, a year before his demise on December 11, 1998.