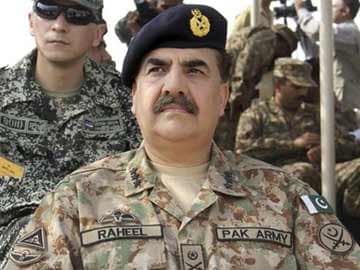 Islamabad: Terming Kashmir as the "jugular vein" of Pakistan, the country's Army Chief Gen Raheel Sharif on Wednesday said the issue should be resolved in accordance with the wishes and aspirations of Kashmiris and in line with United Nations Security Council (UNSC) resolutions for lasting peace in the region.

"Matchless sacrifices offered by Kashmiris will not go in vain," he said.

The resolution of the Kashmir issue is "indispensable" for lasting peace in the region, he said.

"Pakistan Army is in favour of peace but is always ready to respond to any aggression in befitting manner," he said.

Pakistan has often described Kashmir as the "jugular vein" but this is the first time Gen Sharif has used the term or spoken about Kashmir since taking over late last year.

Talking about domestic issues, he said that Pakistan Army believes in strengthening of democracy, supremacy of constitution and rule of law.

The army chief lauded the media and said: "We believe in freedom of media and responsible journalism".

His comments came amid a controversy surrounding the attack on leading Geo TV anchor Hamid Mir and subsequent move by the Defence Ministry seeking cancellation of the broadcasting licence of the channel.

Sharif said Pakistan Army supports every effort for elimination of terrorism and restoration of peace in the country.

He said armed forces of Pakistan are capable enough to foil the nefarious designs of the enemy and remain alert round the clock for defence of the motherland.

Nobody should doubt the capabilities of Pakistan Army as it will come to the expectations of the nation, he said.

Sharif asked anti-state elements to unconditionally accept Pakistan's Constitution and join the national mainstream otherwise the military "with the support of people will take them to task".

Promoted
Listen to the latest songs, only on JioSaavn.com
The ceremony was attended by a large number of dignitaries, including Defence Minister Khawaja Asif and former Army Chief Ashfaq Pervez Kayani.