Deepika Padukone Gets Special Security After Threats Over Padmavati

Padmavati Controversy: Protests have been spreading against the Deepika Padukone-starrer film, with more groups joining the demand that the film be banned.

Padmavati Controversy: The Deepika Padukone-starrer is based on the legend of Rani Padmini of Chittor.

Jaipur: Deepika Padukone has been given special security by the Mumbai Police after a fringe group in Rajasthan called the Karni Sena threatened her with physical harm Thursday, escalating its protests against director Sanjay Leela Bhansali's film Padmavati, which features the actor in the title role.

"Rajputs never raise a hand on women but if need be, we will do to Deepika what Lakshman did to Shurpanakha," said a leader of the group in a video released today, referring to the act of cutting the nose off.  The group has also called for a bandh across the country on December 1, the day the film is scheduled to release.

The threat prompted Mumbai police to increase the actor's security cover. "We are providing her adequate security after the threat... The police will provide security at her residence as well as office in Mumbai," senior Mumbai police officer Deven Bharti told news agency Press Trust of India.

Padmavati is based on the legend of Rani Padmini of Chittor and critics, mostly Rajput groups, say the film wrongly implies a romantic relationship between the queen and Emperor Alauddin Khilji. Sanjay Leela Bhansali has repeatedly denied the allegations and recently released a video clarifying that his film does not distort history.

"If we are talking about the respect of #Padmavati, then it is our moral obligation that we respect every woman. Disrespecting an actor is uncalled for and immoral," union minister Uma Bharti tweeted after the Karni Sena threatened Ms Padukone.

But Rajasthan Chief Minister Vasundhara Raje of Uma Bharti's party the BJP is yet to comment on the threats of the group, which has also, in an open challenge to the state government, said that if Padmavati is not banned by November 17, it will stop tourists from entering the historical Chittorgarh Fort, where Rani Padmini is said to have lived in the 14th century.

Earlier this week, its members went on the rampage in Kota destroying shops and vandalising the ticket window of a cinema hall that was screening a trailer of the film. 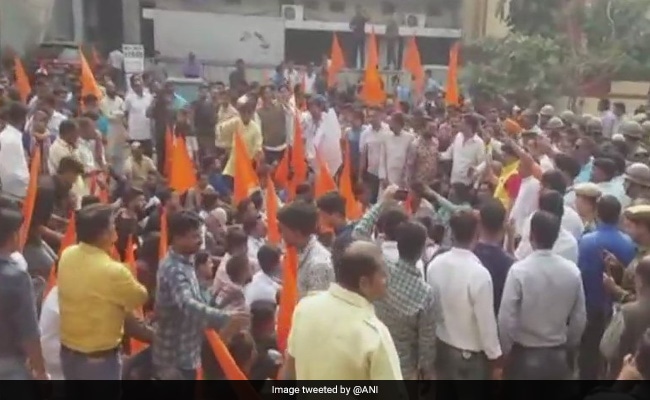 Padmavati Controversy: Protests spread to many places, with more groups demanding that the film be banned

One group has threatened to send signatures in blood to the Censor Board to demand that the film not be cleared for release.

Another minister Kiran Maheshwari said on social media Thursday that she strongly opposes the film, alleging it's been made purely for money and entertainment. "Deceit in any case with the history of immortal valour of such women cannot be accepted," she said.

While the Rajasthan government struggles to handle the protests, the Uttar Pradesh government of Chief Minister Yogi Adityanath has written to the Centre saying that the release of the film can pose a law and order problem for the state.

A senior bureaucrat said in the letter, addressed to the Ministry of Information and Broadcasting that, "The Censer Board members should take a decision after taking into account people's views."

The UP government said it has intelligence reports that the film's producers have presented the movie for the Censor Board's clearance and that "after the release of the trailer of the movie on October 9, various social and other organisations opposed the film." Amid such strong protests, it said, there are fears of law and order being disrupted.

The film ran into trouble with the influential Rajputs of Rajasthan soon after shooting began. Its sets were vandalised twice. The director was attacked while shooting in Rajasthan capital Jaipur. Deepika Padukone as trolled on Twitter with vitriolic tweets recently after she spoke about the film.