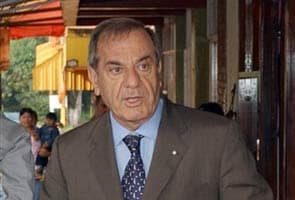 New Delhi: Ottavio Quattrocchi, the man the Central Bureau of Investigation or CBI had been trying to lay its hands on since the time the Bofors scam came to light in 1986, died in Milan on Friday of a heart attack. (Read) The 72-year-old Italian businessman was at the centre of the multi-million dollar scam which scalded the political careers of many Indian leaders, including its youngest Prime Minister Rajiv Gandhi.

The Congress, which bore the brunt of the scandal, today reacted to his demise, not missing the opportunity to attack its rival, the Bharatiya Janata Party or BJP.

Congress spokesperson Abhishek Manu Singhvi stated in an interview to NDTV that Quattrocchi was a "ghost" created by the BJP to assail the Congress.

"The Delhi High Court quashed the charges against Quattrocchi in 2004 when the BJP-led National Democratic Alliance was in power," he said, charging that "the government of the day did not file any appeal against the ruling".

Promoted
Listen to the latest songs, only on JioSaavn.com
"From 1998 to 2004, BJP tried to tom-tom this thing during elections and lost this issue in at least three or four elections. They were unable to do anything to prove complicity in this crime," Mr Singhvi continued.

BJP leader Prakash Javadekar, however, dismissed Mr Singhvi's remarks saying the ghost was created because the Congress was "hosting" him. "...the ghost was not created by BJP but by VP Singh and if we had created the ghost, it is because you were hosting it," he retorted.