Opposition Parties Protest Outside Parliament Over Non-Payment Of GST Dues, Congress Not Invited 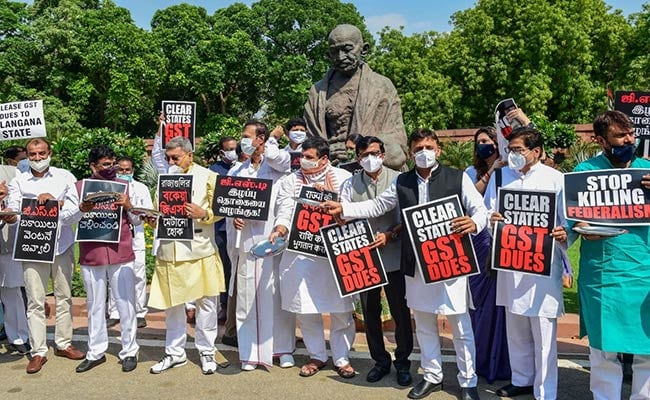 The leaders of eight opposition parties on Thursday held a protest in the Parliament complex against the government, demanding GST dues. Congress leaders were absent from the protest.

Addressing a press briefing after the protest, Trinamool Congress (TMC) MP and national spokesperson Derek O'Brien said the largest opposition party was not invited for the agitation.

"It is increasingly becoming clear to us that in Parliament, the regional parties are finding it easier to coordinate with each other to strategise. The Congress can no longer decide the subject and then the dosage of opposition strategy. They cannot do something in the states and seek support in Parliament," Mr O'Brien said.

The protest comes ahead of a scheduled debate on Goods and Services Tax (GST) in Rajya Sabha, that the government agreed upon on the insistence of the opposition parties in an informal meeting chaired by Defence Minister Rajnath Singh on Wednesday evening.

At a meeting of the GST council on August 27, Finance Minister Nirmala Sitharaman had acknowledged that states are likely to face a GST revenue gap of Rs 3 lakh crore this year, as the economy may contract due to COVID-19, which she termed an unforeseen act of God . The states were asked to borrow to meet the shortfall.

When asked as to why the Congress was not invited for the protest, sources in the regional parties said parties like the TRS and AAP were not comfortable sharing space with the principal opposition party of the country.

The protest that lasted for around 15 minutes saw leaders like Akhilesh Yadav, Supriya Sule, Manoj Jha, Sanjay Singh among others holding banners and 'thali' (plates) to show what the states were paid by the Centre as GST dues.