Onion, tomato traders in Delhi go on strike against raids 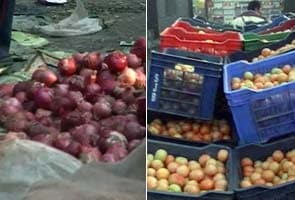 New Delhi: Onion and tomato prices may increase further as traders in Azadpur Mandi in Delhi have gone on a strike from today against tax raids, even as the state government has threatened to invoke the Essential Services Maintenance Act (ESMA) against them.

The traders at Azadpur, Asia's biggest vegetable and fruit market, are protesting against the income tax raids, which are being carried out throughout the country to check hoarding.

Onion prices continue to be in the range of Rs 55-60 per kg in retail markets. The government has also asked agri cooperative NAFED to open more outlets to sell onion at a cheaper rate of Rs 35 a kg in Delhi and the NCR.

"Onion traders are feeling harassed by income tax raids and have thus decided to go on strike from tomorrow (Wednesday)," Delhi Agricultural and Marketing Board Chairman Brahm Yadav said.

Other mandis in Delhi and NCR region may also join the protest, he said.

Responding quickly, Delhi Food and Civil Supplies Minister Haroon Yusuf said, "If necessary, the Delhi government would not hesitate to invoke ESMA against the traders if they go on strike.

"We are trying our best to bring down the prices of onion and at this juncture, the strike is totally uncalled for," he said.

Yusuf, however, said government was ready to look into "genuine grievances" of the traders but would not allow them to make people suffer because of the agitation.

Meanwhile, Union Agriculture Secretary PK Basu said that the Centre was in touch with the state (Delhi) government to address traders' concerns so that supply of onion was not affected.

The strike call by traders in Azadpur mandi follows a similar move in Nashik, Maharashtra, where the crisis was averted on Monday following intervention by the local authorities.

The traders are demanding immediate stop to income tax raids and surveys while denying any hoarding in the market.

"We are not responsible for shortages because of which prices are going up. We are neither hoarding nor profiteering," General Secretary of the Tomato and Onion Merchants' Association in Azadpur mandi, Rajendra Sharma, said. (With PTI Inputs)