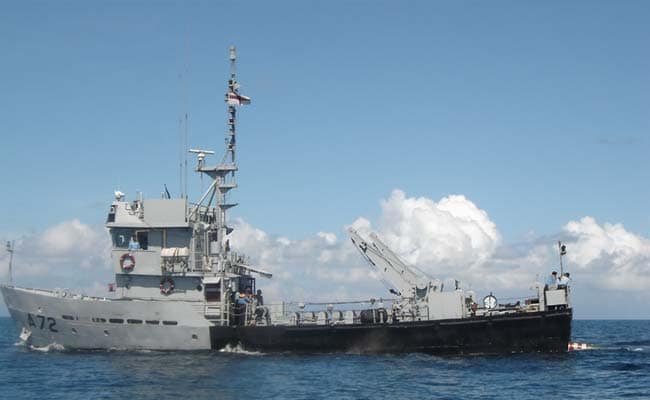 The Torpedo Recovery Vessel which sank on Thursday evening was built in 1983.

Visakhapatnam: Nearly 18 hours after a navy vessel on a torpedo recovery mission sank off the coast of Visakhapatnam, four personnel remain missing. One person was killed and 23 people were rescued when the vessel started sinking last evening.

The vessel has reportedly sunk to a depth of around 370 metres. Sources say a crack may have developed in the hull, specifically a recess called the sea chest designed for water intake, which resulted in water gushing in and sinking the ship.

The Torpedo Recovery Vessel of TRV was on a routine mission to recover practice torpedoes fired by fleet ships during an exercise. The ship, 23 meters long and 6.5 meters at the beam, was built by Goa Shipyard Limited in 1983, a statement by the Navy said.

Seven ships, some of them with side scanning and 'bottom profiling' abilities, aircraft with night vision facilities and two helicopters are searching for survivors.

The accident is one of the many that the Navy has witnessed over the last year.

Navy chief Admiral RK Dhowan has cut short a visit to Seychelles after the latest incident. He took over as the Chief of the Naval Staff on April 17 this year, after his predecessor DK Joshi quit taking responsibility for a series of accidents.

Promoted
Listen to the latest songs, only on JioSaavn.com
On October 31, INS Kora suffered minor damage after it was scraped by a merchant vessel near Visakhapatnam.