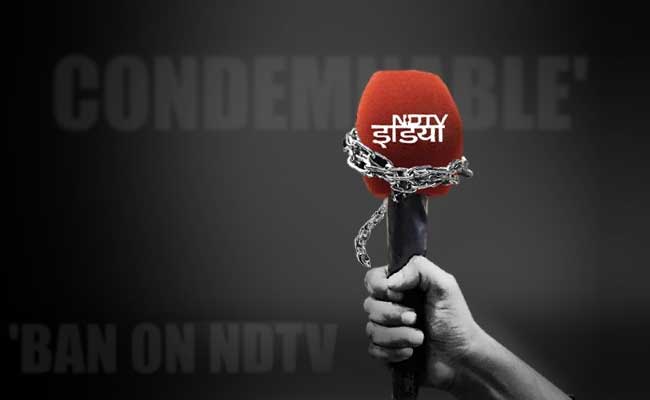 The one-day ban ordered on NDTV India was widely condemned by journalists and editors.

New Delhi: The one-day ban on NDTV's Hindi channel, widely condemned, has been put on hold by Information and Broadcasting Minister Venkaiah Naidu.

The decision comes after the Supreme Court agreed to hear NDTV's application for a stay on the ban tomorrow.

This afternoon, representatives of NDTV met with the Information and Broadcasting Minister. They reiterated that NDTV India did not broadcast sensitive details of January's terror attack on the air force base in Pathankot - and that the channel had not been given a fair chance to offer evidence that it did not share any information that was different from what other channels and newspapers presented at the same time.

The ministry's order says the ban has been put aside while it reviews the case (scroll down to read entire government order).

Last week, NDTV India was ordered to stop broadcasting for 24 hours (Wednesday). Today, the Press Club of India declared the government's action amounts to "uncalled for censorship" at a time when "press freedom is already under increasing threat in the country."

NDTV is incredibly grateful and overwhelmed by the unflinching support we have received since the ban was announced. Every association of journalists in every part of the country has stood up to fight for a constitutional right, making it clear that this is by no means about NDTV or one channel, but about the vibrant, free and responsible media that is such an important constituent of India's democracy.

As always, NDTV stands firm in its commitment to balanced and responsible journalism because of the continued trust that you, our viewers, place in us, and our experience of over 25 years of award-winning reportage.

Promoted
Listen to the latest songs, only on JioSaavn.com
This is the full order: