On His Way To Ayodhya To Meet Farmers, UP Congress Chief Detained In Barabanki

Ajay Kumar Lallu was accompanied by Congress's state spokesperson Tanuj Punia and some other leaders. 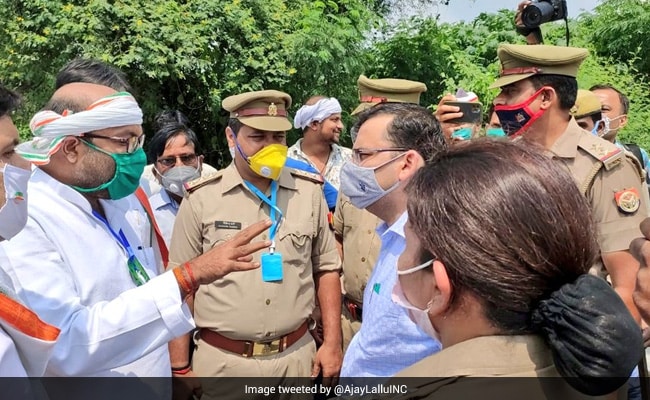 Ajay Kumar Lallu was detained by police in Barabanki district

Uttar Pradesh Congress chief Ajay Kumar Lallu was detained by police in Barabanki district on Thursday while he was on his way to Ayodhya to meet farmers regarding a matter of alleged arbitrariness in the compensation paid to them by the state government for land.

"The state government has given a meagre amount to the farmers for their land acquired for development purposes. Apart from this, there is a huge difference in the amount given as compensation for the same land of different persons. Lallu, who was going to share the pain of the farmers, was detained by police at the Ahmadpur toll plaza in Barabanki and taken into custody," state Congress media convenor Lalan Kumar said.

Mr Lallu was accompanied by Congress's state spokesperson Tanuj Punia and some other leaders.

The state Congress chief strongly condemned the police action and said the BJP-led government is taking farmers' land at throwaway prices in Ayodhya in the name of land acquisition.

He said the "undeclared emergency" imposed by Chief Minister Yogi Adityanath is suppressing the voice of farmers, weavers and youngsters, and the Congress will not back down from its fight against the state government.