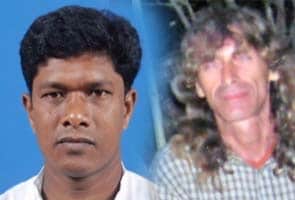 Bhubaneswar: Subhashri Das, also known as Mili Panda, wife of top Odisha Maoist Sabyasachi Panda has been acquitted by a fast track court in Gunupur in Odisha's Rayagada district. The court has cleared her of all charges in a case that accused her of taking part in a Maoist armed attack on the police in Kutinguda jungle in Gudari block of Odisha's Rayagada district in 2003. Incidentally Subhashree was a mother of an 8-month old baby when the incident took place in 2003.

As of now, all charges against her have been dropped and she has been  released from jail today on the basis of the court's acquittal order.

Her acquittal means that one of the demands made by the Maoist leader Sabyasachi Panda has been fulfilled by the judiciary and not the state government.  The Maoists have still not made it clear if this will pave the way for the release of the Italian tour operator Paolo Bosusco.

While the deadline given by Maoists in Odisha for the release of two hostages, Mr Bosusco and Biju Janata Dal (BJD) MLA Jhina Hikaka ends today, the state government seems to have toughened its stand.

Last night, three senior officials including the state Home Secretary, who were involved in the negotiations to free the Italian hostage told the media that all the 27 prisoners who would be released to meet the demands of both the Maoist groups, will have to move bail petitions in the concerned courts for their release.

"Since their release from the jail involves the judicial process of grant of bail by the concerned courts the detainees have to file their bail application. It is advised that steps be taken on behalf of the 23 detainees to file their bail petition," said UN Behera, Odisha Home Secretary.

This is for the first time that the state government has clearly spelt out the conditions involved in what it had so far described as the 'judicial process'.
Maoist prisoners have always rejected the idea of release on the basis of bail and there is little chance that any one of the 27 prisoners would ever move bail petitions.

However, there is no word from either of the Maoist groups.

Officials have said that the two mediators nominated by Maoists need to pass on a copy of their joint statement to Sabyasachi Panda, the Odisha Maoist chief - who is holding Mr Bosusco captive - so that any confusion that he may have had about the negotiations can be cleared.

Mr Bosusco, a 51-year-old tour operator was taken hostage by the Maoists on March 14 alongwith compatriot Claudio Colangelo, a tourist. Even as Mr Colangelo was allowed to go, Mr Bosusco continued to be held captive with the Maoists remaining firm on the charter of demands.

Promoted
Listen to the latest songs, only on JioSaavn.com
Jhina Hikaka, the 37-year old dynamic tribal leader who was elected for the first time to the state assembly in 2009 from the Laxmipur seat, was abducted by Maoists in Koraput district of Odisha on March 24. The BJD leader was on his way back home at Laxmipur from Koraput. He was taken hostage by Maoists while his driver and personal security officer were let off.