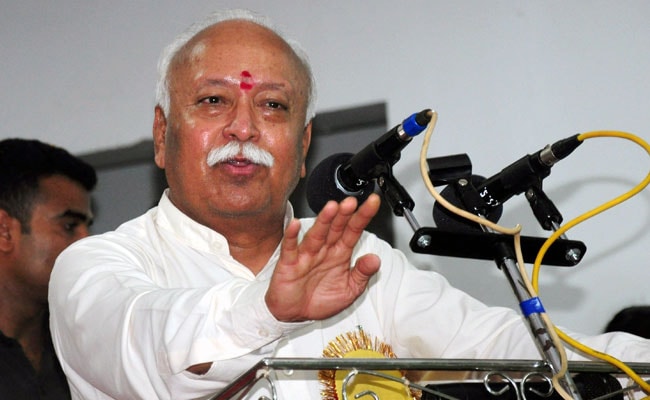 Rashtriya Swayamsevak Sangh chief Mohan Bhagwat has said he will not run for President.

New Delhi: Rashtriya Swayamsevak Sangh chief Mohan Bhagwat has dismissed speculation that he could run for President in elections to be held later this year, saying he considers such talk "entertainment".

"My name will not be proposed and if it is I will not accept," Mr Bhagwat said on Wednesday morning while addressing a gathering in Maharashtra's Nagpur, where the RSS, the ruling BJP's ideological mentor, is headquartered.

The BJP's prickly ally in Maharashtra, the Shiv Sena had earlier this week said that Mr Bhagwat as India's next President was a good idea. "Somebody with a clean image should occupy it. We have heard that Mohan Bhagwat's name is being discussed for President. If India has to be made a Hindu Rashtra, Bhagwat will be a good choice for President," said the Sena's Sanjay Raut.

Main opposition party the Congress immediately made it clear that it would block any move to make Mr Bhagwat President. "It is very clear that we do not support RSS ideology," Congress spokesperson Gaurav Gogoi said.

The Congress has said it will hold discussions internally to name a candidate for Rashtrapati Bhavan. Mr Gogoi did not comment when asked whether the Congress could work on a consensus with the government to pick the next President without a contest.

Prime Minister Narendra Modi will host a dinner tonight for all members of Parliament from the BJP's allies to discuss the National Democratic Alliance or NDA's candidate for President.

Promoted
Listen to the latest songs, only on JioSaavn.com
The President of India is elected by an electoral college made up of the 776 members of both houses of Parliament and 4,120 state legislators. The total strength of the electoral college is 10,98,882 votes and the halfway mark is 5,49,442 votes.

After its wins in this month's assembly elections, especially the mammoth win in Uttar Pradesh, the NDA is now short of only about 25,000 votes and parties like the Biju Janata Dal and the AIADMK, which have in the past provided such support, can easily help bridge that deficit.