According to reports, the trailer of "Thackeray" faced objections over a few scenes and sentences that could possibly cause problems and hurt religious sentiments. 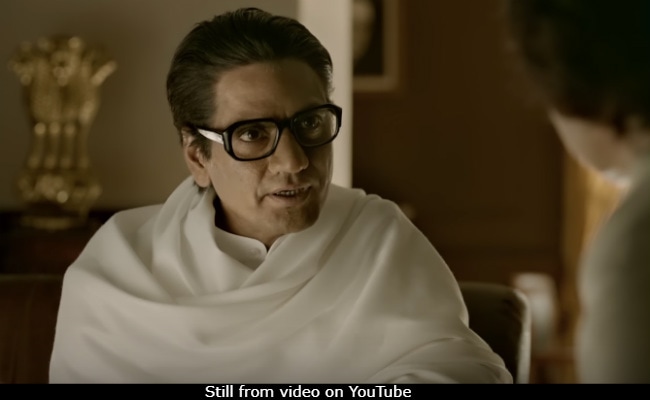 Politician Sanjay Raut, who has written the story of "Thackeray", based on the life of Bal Thackeray, says that nobody can ban the film and that the CBFC, which has raised objections on the movie, will understand the vision of the Shiv Sena founder.

During the trailer launch of the film on Wednesday, Mr Raut told the media: "We have projected Balasaheb exactly the way he lived his life, the way he expressed his opinions on his people and political situations. We did not fictionalise anything. Abhijit (Panse, director of the film) projected everything in a real manner in the film."

"Nobody can ban the film. It is the story of Thackeray.... How could someone stop that? Balasaheb banned many people during his time. Did you people forget that? How could CBFC decide what is right or wrong on saheb's life? Only family members know that. I am sure even the censor board will understand the vision of Balasaheb. They will take time, but they will understand."

According to reports, the trailer of "Thackeray" faced objections over a few scenes and sentences that could possibly cause problems and hurt religious sentiments.

In the trailer, it is clear that Nawazuddin's Thackeray is commenting on the demolition of the Babri Masjid and the Hindu-Muslim riots that took place in Mumbai in 1992. It also shows how the politician commented on the India and Pakistan relationship during his active political years.

The trailer launch took place at the Carnival, Imax theatre, where the spirit of Marathi culture was celebrated. Thousands of followers of the Shiv Sena party and Thackeray gathered at the venue. His family members -- Uddhav Thackeray, Rashmi Thackeray -- along with actress Amrita Rao and other crew members were also present.

The place was decorated with a picture of Thackeray and his sketches that he made as a cartoonist at the beginning of his career.

"Thackeray" will be releasing on January 25 in Hindi and Marathi languages.