"No Rush, Have To Earn It": Robert Vadra Dials Down Election Buzz

Speculation peaked that Priyanka Gandhi Vadra's husband is planning to contest the national election, due by May, as the Congress candidate from Moradabad. 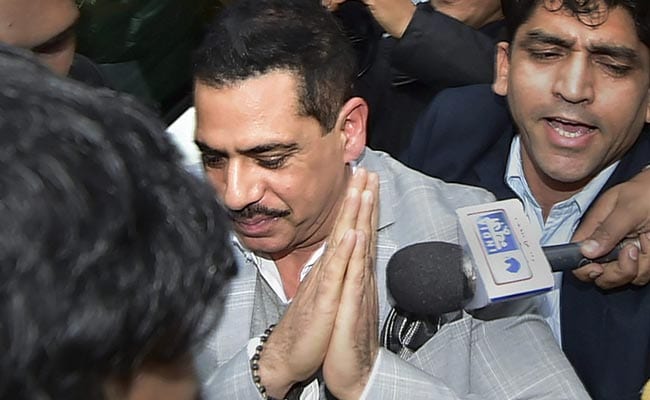 Robert Vadra had been the prime target for BJP's corruption charges against the Congress.

A day after his loaded Facebook post, Robert Vadra's political ambition was on display in posters in Moradabad, his hometown in Uttar Pradesh. "Robert Vadraji, you are welcome to contest from the Moradabad Lok Sabha seat," screamed the posters that also featured his in-laws, Congress president Rahul Gandhi and Sonia Gandhi.

Speculation peaked that Priyanka Gandhi Vadra's husband is planning to contest the national election, due by May, as the Congress candidate from Moradabad. The posters emerged just weeks after Priyanka, the younger sister of Rahul Gandhi, formally joined the party after a long time in the Congress backrooms. Both when Priyanka's debut was announced and when she went on her first roadshow in Lucknow earlier this month, Robert Vadra posted messages wishing her.

But to NDTV, Robert Vadra said there were "no immediate plans" to contest. "...I am still dealing with ED (Enforcement Directorate),'' he remarked, adding, "I am in no hurry as I have to earn it.''

Robert Vadra, 50, a controversial figure always seen to be a cause of discomfiture for the Congress party, is being investigated in a money-laundering case and has been through marathon grilling sessions. Investigators claim he directly or indirectly owns nine London-based properties worth around 12 million pounds, bought between 2005 and 2010, when the Congress-led government was in power.

Battling allegations of shadowy land deals in Haryana and Rajasthan when the Congress was in power, Robert Vadra had been the prime target for BJP's corruption charges against the Congress and was seen less and less when Priyanka Gandhi campaigned in the family constituencies of Amethi and Raebareli in the past few elections. The father of two kept a distance from the campaign, occasionally speaking up on social media in his defence.

His Facebook post on Sunday made it clear that a bigger role in politics was on his mind. "The years n months that I spent campaigning n working in different parts of the country, but mainly in UP, gave me a feeling to do more for the people n make smaller changes possible by me, in their areas n when they got to know me, the genuine love, affection n respect I earned was humbling ... All these years of experience n learning cannot be just wasted and should be put to better use... once all these accusations n allegations are over, I feel I should dedicate a larger role in serving the people...."

In a statement later, he was more emphatic: "I don't have to be in politics to help the people of the country, but if by joining I can make a larger difference, then why not? But the people will decide".

Today, he told reporters, "I will start working on it". But first, he said, "I need to absolve myself from baseless accusations and allegations."

He added that "people need to feel that I can make a change... All in time."

Moradabad, currently with the ruling BJP, is a coveted seat for the Congress. Former cricketer Mohammad Azharuddin, who won the seat as a Congress candidate in 2009, is believed to be keen on contesting from the town famous for its handicraft and exports.

After being snubbed by the Mayawati-Akhilesh Yadab combo, the Congress is contesting alone in Uttar Pradesh, which, with 80 parliamentary seats, is the holy grail for parties as they seek power at the centre.

The ruling BJP's Mukhtar Abbas Naqvi, a Union Minister, said cuttingly: "In this P-R (Priyanka-Rahul) power circus, a joker was missing. Now the Joker seems set to make an entry."

It's not the first time that Robert Vadra has shown his interest in politics. When asked if he would contest elections while he was accompanying wife Priyanka during campaigning in Uttar Pradesh in 2012, he had told NDTV, "If people will wish that, then I will definitely come''.