Chief Minister Nitish Kumar on Tuesday flagged off a fleet of electric buses at the chief minister's secretariat and took a ride to the Vidhan Sabha. 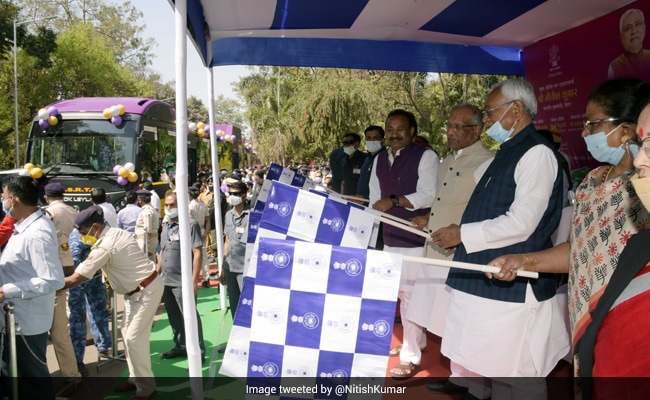 The buses come in both AC and non-AC variants.

Public transport in Bihar is set to go environment-friendly and will make use of sustainable energy with the launch of electric buses.

Chief Minister Nitish Kumar on Tuesday flagged off a fleet of electric buses at the chief minister's secretariat and took a ride to the Vidhan Sabha, a kilometre away, to take part in the day's proceedings.

"In the initial phase, we shall be having a fleet of 25 buses. Twelve have already arrived and the remaining shall be available soon," Mr Kumar said.

"I can assure passengers of a very comfortable ride, besides the obvious advantages of reducing dependence on petroleum fuel", he told reporters.

The buses which come in AC and non-AC variants, would be plied, in the first leg, in cities like Patna, Rajgir and Muzaffarpur.

These would be equipped with facilities like GPS and e-ticketing.

Besides, amenities like mobile travel passes and prepaid cards are also being introduced for the convenience of travellers.

Answering a question if a ride on the electric bus will cost more, the chief minister replied in negative.

The occasion was also marked by inauguration, through remote control, of modern district transport offices at Gaya, Jehanabad, Madhepura and Buxar which have been developed at a total cost of Rs 10.37 crore.

Mr Kumar, who was accompanied by Deputy Chief Ministers, Tarkishore Prasad and Renu Devi- and a number of other cabinet colleagues, also disclosed that a plan was afoot to make use of ethanol produced at sugar mills as an additive for petrol which would further reduce the dependency on the fuel.