The nearly 80-year-old Ms Bose Pfaff told PTI, that she would like the remains now kept at Renkoji Temple in Japan. 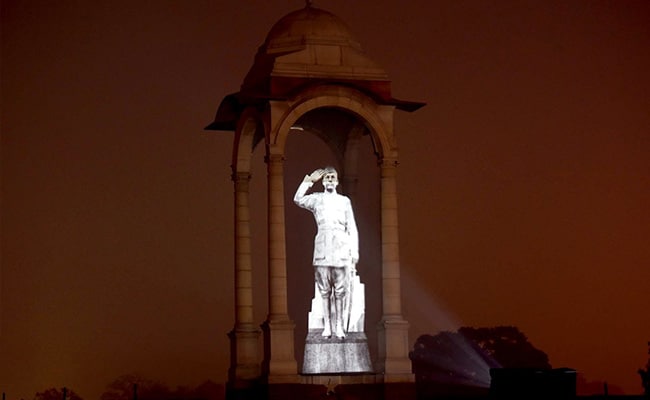 She said a DNA test could be conducted to "satisfy doubters".

Netaji's daughter Anita Bose Pfaff will miss the unveiling of her father's statue at India Gate by Prime Minister Narendra Modi on Thursday, but would like to meet the PM to discuss "the conditions and procedures" for bringing back Subhas Bose's remains to India.

The nearly 80-year-old Ms Bose Pfaff told PTI, that she would like the remains now kept at Renkoji Temple in Japan, since the plane crash at Taipei after which Netaji died at a hospital, to be brought back with due honour.

"I would like to discuss (with the Prime Minister) the conditions and procedures for a return of my father's remains ," said Ms Bose Pfaff, an economist by profession, in a telephonic interview with PTI.

She said that though she had received an invitation to attend the unveiling of Netaji's statue, the short notice made it difficult for her to undertake the long distance travel from Germany where she lives. The statue is being unveiled at India Gate under a canopy where decades earlier the image of King George V, against whom he rebelled had stood.

"I would have wanted to combine a trip to India with a meeting with the Prime Minister ... but I understand he is busy at the moment. Among other things, the Prime Minister of Bangladesh Sheikh Hasina is on a state visit," said Ms Bose Pfaff, whose husband Martin Pfaff, is a former member of the German Parliament from the Social Democratic Party.

She said that, "I have not been able to discuss the issue of return of the remains personally with the leadership of the country, except in my talks with Pranab Mukherjee (then External Affairs Minister in the Narasimha Rao cabinet in the mid-1990s), on this," The P.V Narasimha Rao government in the 1995-96 had been on the verge of bringing to India the urn kept at Renkoji, believed to contain the remains of Subhas Chandra Bose.

Researchers including Ashish Ray, Netaji's grand-nephew, suggest it was dissuaded from doing so by an intelligence appraisal which predicted that the controversy surrounding the issue could lead to riots in Kolkata.

"As far as I understand, the eyewitness evidence is convincing and conclusive in proving these (remains kept at Renkoji) are Netaji's and a final resting place for them is needed in this country," said Ms Bose Pfaff.

She said a DNA test could be conducted to "satisfy doubters" but pointed out that despite scientific advances, it remained a moot question whether it would be possible to extract DNA from the remains.

Eye-witnesses, including Col Habibur Rahman of the INA, had said Bose died in a plane crash in August 1945 in Taipei.

Theories that he survived or was never on the aircraft that crashed gained ground as a result of a report by a Commission of Enquiry headed by Justice MK Mukherjee, as also a hypothesis that he may have turned into an ascetic or imprisoned in a Russian gulag.

Three members of the Bose family, including Netaji's daughter Anita Pfaff, Dwarka Nath Bose -- a well-known physicist and son of his elder brother, and Ardhendu Bose -- another nephew of Netaji, wrote to Prime Minister Modi in October 2016 and December 2019, asking him to order a DNA test of the ashes at Renkoji.

The letter written in December 2019 said that "in view of the fact that some Indians, have previously voiced their doubts regarding the death of Netaji in Taipei, we hope the scientific evidence of such a test will bring closure to the discussion in India".

A recent translation of a letter in Japanese written by the chief priest of Tokyo's Renkoji temple, keeper of the urn containing ashes and bone fragments believed to be those of Netaji, to the Indian government in 2005 suggests that permission was given for DNA test of the remains to the Mukherjee Commission.

However, for inexplicable reasons this portion of the letter was not translated and the Mukherjee Commission's report on the disappearance of Bose concluded that "on account of the Temple Authorities reticence... the commission could not proceed further (on the issue of DNA tests)".

Madhuri Bose, the legendary freedom fighter's grand-niece, told PTI, "We had commissioned the fresh translation after finding inconsistencies in the Mukherjee Commission report."

The new translation by a Japanese language expert revealed that Nichiko Mochizuki, the chief priest of the Renkoji Temple -- a 427-year-old Buddhist temple, had written: "I agreed to offer my cooperation for the testing".