Many passengers were airlifted by the Air Force as incessant rain impeded rescue operations which were on since Saturday, when the two trains were stranded in Lumding section of NFR in Dima Hasao district 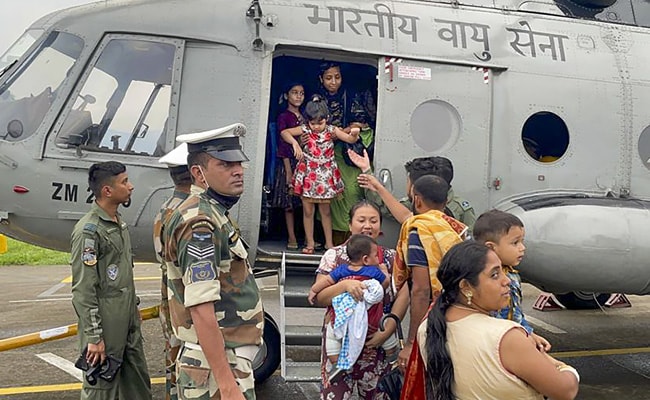 Many passengers were airlifted by the Air Force.

The evacuation of about 2800 passengers of two trains, which were stranded in Lumding-Badarpur hill section in Assam for two days due to massive landslides and waterlogging on the tracks caused by incessant rains, was completed on Monday with help by the Air Force and other agencies, a Northeast Frontier Railway (NFR) spokesperson said.

Many passengers were airlifted by the Air Force as incessant rain impeded rescue operations which were on since Saturday, when the two trains were stranded in Lumding section of NFR in Dima Hasao district, he said.

An official bulletin said three persons have been killed in the mudlslide in Haflong revenue circle and 57,119 people have been hit by the floods in seven districts of Assam on Monday as incessant rains continued to lash most parts of the state.

The bulletin said 4,330 of the affected people have been lodged in 20 relief camps set up by the government. Nine relief distribution centres are operating in different affected districts.

A total 10,321 hectares of crop land have been inundated in the current spate of floods, it said.

The NFR spokesman said in Guwahati that about 18 trains in the section have been cancelled in the affected area since Saturday and more than 10 others have been short terminated as work for restoration of the damaged railway tracks are on in full swing despite the incessant rain, he said.

A report from Haflong, headquarter of Dima Hasao district, said most part of the New Halflong Railway Station is under water and an empty train stranded there has derailed as the track loosened with the soil underneath was washed off by rain waters.

Road links to the district have also snapped due to the incessant rains and the the landslides in multiple locations.

Prevent Muslims From Being Misled In 2024 Polls: Mayawati To Party Workers