Navy Bilateral Drill Of India, Bangladesh At Visakhapatnam From Today

The exercise would also include air familiarisation of Bangladesh Navy aircrew and a 10-day training exercise between Indian Navy Marine Commandos and BN SWADS, Navy said. 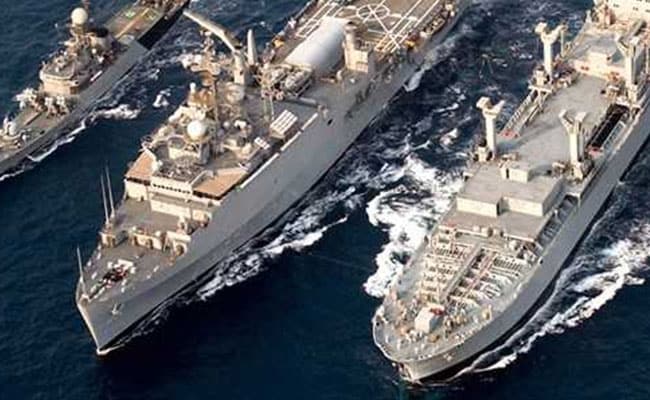 The two-day CORPAT will be followed by the maiden edition of IN-BN Bilateral Exercise: Navy (File)

The navies of India and Bangladesh will participate for the first time in a bilateral exercise at Visakhapatnam from October 12 to 16, the Navy said on Friday.

The exercise would also include air familiarisation of Bangladesh Navy aircrew and a 10-day training exercise between Indian Navy Marine Commandos and BN SWADS, it said.

The second edition of the Indian Navy (IN) and the Bangladesh Navy (BN) Coordinated Patrol (CORPAT) commenced in northern part of Bay of Bengal on Thursday.

The drill will take place a week after Bangladesh Prime Minister Sheikh Hasina's visit to India.

INS Ranvijay, a guided-missile destroyer and INS Kuthar, an ingeniously built missile Corvette are participating in the CORPAT along with BNS Ali Haider, a Type 053 frigate and BNS Shadinota, a Type 056 stealth guided missile corvette.

"The two-day CORPAT will be followed by the maiden edition of IN-BN Bilateral Exercise at Visakhapatnam from October 12 to 16," the Navy said in a statement.

The IN-BN CORPAT, which commenced last year, is aimed at upgrading to a bilateral exercise with the navies engaging in seamanship evolutions, flying exercises with integral helicopters and maritime patrol aircraft at sea.

Additionally, exercises entailing the development of mutual communication and sharing of best practices would also be undertaken, adding a new dimension to the Indo-Bangladesh maritime relations, the Navy said.

With a common territorial boundary of over 4,000 kilometres and a maritime boundary, the navies of both the countries aim to practice and hone their mutual cooperation whilst patrolling near the International Maritime Boundary Line (IMBL) during the current edition of CORPAT, it added.

The sea phase would be followed by harbour phase that would include professional interaction between the navies, visits to the Indian Naval training and maintenance facilities at Visakhapatnam.