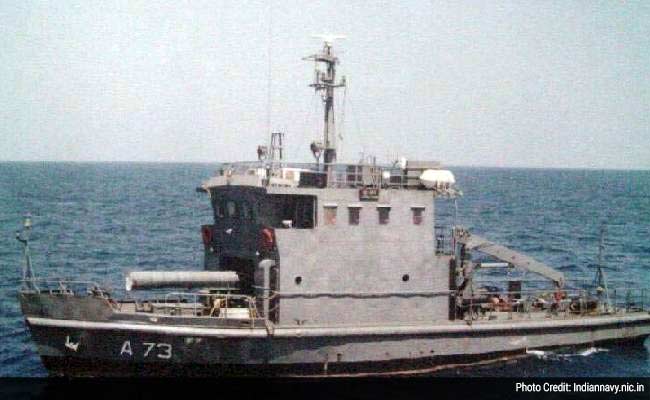 Visakhapatnam: One person has died and four others are missing after a Torpedo Recovery Vessel of the Navy sank off the coast of Visakhapatnam this evening.

23 others on board were rescued by the Search and Rescue (SAR) ships dispatched to the area. Ships, aircraft with night vision facilities are also involved in search and rescue operations.

The vessel was on a routine mission to recover practice torpedoes fired by fleet ships during a routine exercise. It started sinking after there was flooding in one of its compartments, said a statement by the Navy.

The Torpedo Recovery Vessel or TRV is an auxiliary vessel which is used to recover practice torpedoes fired by fleet ships and submarines. The ship is 23 meters long and 6.5 meters at the beam. This particular ship was built by Goa Shipyard Limited in 1983, the statement by the Navy said.

The accident is one of the many that the Navy has witnessed over the last year.

Navy chief Admiral R K Dhowan took over as the Chief of the Naval Staff on April 17 this year, after his predecessor DK Joshi quit following a series of accidents.

Promoted
Listen to the latest songs, only on JioSaavn.com
On October 31, INS Kora suffered minor damage after it was scraped by a merchant vessel near Visakhapatnam.