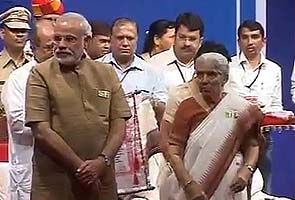 Gandhinagar: Narendra Modi's government today took advantage of the opposition's absence in the state assembly to pass without fracas a diluted Gujarat Lokayukta Commission Bill 2013, which includes no change sought by the state's governor, Kamla Beniwal.

Ms Beniwal had last month returned the bill, which proposes to give all powers to appoint the state Lokayukta or ombudsman to a committee headed by the Chief Minister, virtually eliminating the governor as well as the Chief Justice of the Gujarat High Court from the process.

The bill provides that the state government can choose to accept or reject the Lokayukta's findings. Ms Beniwal said this defeats the purpose of an independent probe.

It will be sent to the governor again and she is obliged to sign the bill this time or then refer it to the President of India.

Only members of Mr Modi's BJP, which enjoys a big majority, were present in the state assembly when the bill was passed today; opposition MLAs were on Monday evicted from the House and suspended for two days following fracas. An angry Congress said it would boycott the rest of the session.

Ms Beniwal and Mr Modi have been on a collision course for some years now over the appointment of the ombudsman.

The state assembly had passed the bill in April this year after the Modi government lost a two-year long legal battle in the Supreme Court over the appointment of retired judge Justice RA Mehta as Lokayukta by the Governor. Ms Beniwal had made that appointment without consulting the state cabinet, much to Mr Modi's chagrin.

Even after he lost his battle first in the Gujarat High Court and later in the Supreme Court, Mr Modi made no notification towards the appointment of the state Lokayukta.

Promoted
Listen to the latest songs, only on JioSaavn.com
Amid public spats, the Chief Minister has repeatedly demanded that Governor Beniwal be recalled.

Gujarat has not had a functioning Lokayukta for years. The position was vacant for eight years till Justice Mehta's appointment was announced in 2011.