This comes within a month of the deadly ambush in Manipur that killed seven people, including a Colonel and four jawans of the Assam Rifles. 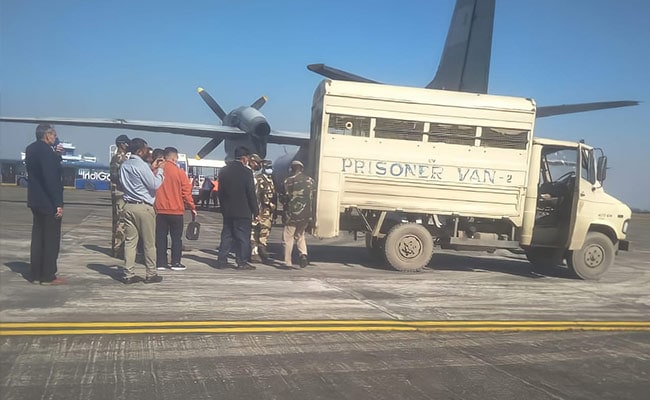 This handover comes within a month of a deadly ambush in Manipur that killed 7 people.

In a swift early morning operation, an Indian Air Force aircraft airlifted five terrorists of a rebel group that operates in Manipur from Mandalay in Myanmar to Imphal, intelligence sources said. Myanmar's Army had on Wednesday handed over five cadres of the banned Revolutionary People's Front (RPF) outfit and its armed wing, the PLA.

"A special flight brought the five Manipur-based RPF militants from Myanmar and landed at the Imphal airport on Wednesday morning before the handing over of the extremists to the Manipur police. The PLA cadre guerillas were immediately taken to an undisclosed location by the police and they are being interrogated by senior officials," said another senior official of Manipur police who wished to remain anonymous.

The five terrorists, who have given themselves military honorifics, have been identified as - Major Koireng, Major Angam, Major Banner, Captain Abi, and Captain Devan.

Intelligence sources added that these terrorists were caught a year back, before the Myanmar military coup. They were arrested during Operation Sunrise, which the Myanmarese army had carried out against Northeast Indian rebel groups who have bases in the Sagaing region. These five were picked up from Monywa.

This handover comes within a month of the deadly November 13 joint ambush by the PLA and the Manipur Naga People's Front in Manipur's Churachandpur district where four jawans of Assam Rifles were killed along with Colonel Viplav Tripathi, his wife, and their 9-years-old son. Intel sources, however, added that these five terrorists were not involved in the Churachanpur ambush but their group, the PLA, was involved and had taken responsibility.

This is not the first time Myanmar has handed over Indian terrorists. In 2020, they handed over 22 terrorists to India. These men belong to six different insurgent groups from Assam and Manipur and were flown to India in a special plane. This is the first time that Yangon has accepted the Indian government's request and handed over the terrorists who were arrested in 2019.