In view of the lockdown due to coronavirus outbreak, only trucks carrying essential commodities are plying on the highway over the past four days. 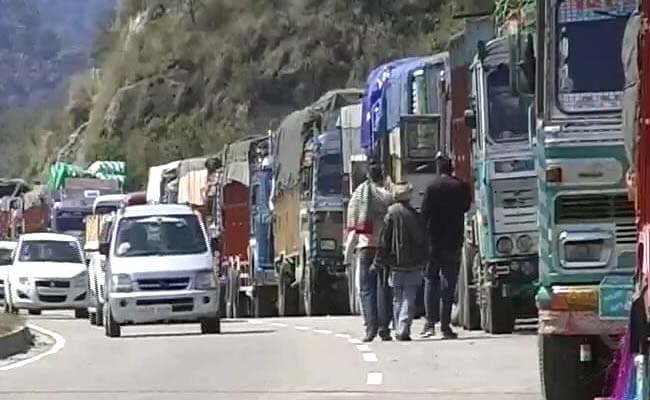 The Jammu-Srinagar National Highway was blocked at over a dozen places by landslides triggered by heavy rains in Ramban district, leaving hundreds of trucks carrying essential commodities to Kashmir stranded, officials said today.

The men and machinery are on the job and efforts are on to make the 270-km-long highway, the only all-weather road linking Kashmir with the rest of the country, ready for traffic, they said.

High altitude areas of Jammu and Kashmir experienced snowfall, while the lower hills and plains were lashed by incessant rains throughout the day on Friday, resulting in considerable dip in the mercury.

"The highway was blocked around Friday noon due to landslides and shooting stones from the hillocks at over a dozen places between Chanderkote and Banihal (Ramban district)," Deputy Superintendent of Police, traffic (national highway), Ajay Anand told news agency Press Trust of India.

With the improvement in the weather this morning, he said, the road clearance agencies rushed to the landslide hit areas including Cafeteria morh, Ramban, Monkey morh, Battery chashma, Panyal morh, Digdol, Panthyal, Mompassi, Hingni and Sherbibi and are making efforts to restore the highway.

"The restoration work will take time but we are hopeful of clearing the stranded trucks by this evening," he said.

In view of the lockdown due to coronavirus outbreak, only trucks carrying essential commodities are plying on the highway over the past four days.

Meanwhile, a  56-year-old woman was killed and four members of her family were injured when their mud-house collapsed due to heavy rains in RS Pura sector of Jammu, a police official said.

The mud-house collapsed at Jinder Melu village on Friday, trapping five members of the family, he said, adding the local residents and police immediately rushed to the scene and pulled out the body of the woman from the debris.

The other four injured were shifted to a hospital and their condition was stated to be "stable", he said.