Nusrat Jahan, a first-time parliamentarian and a popular Bengali actress, on Saturday hit back at the critics saying she represents an "inclusive India". 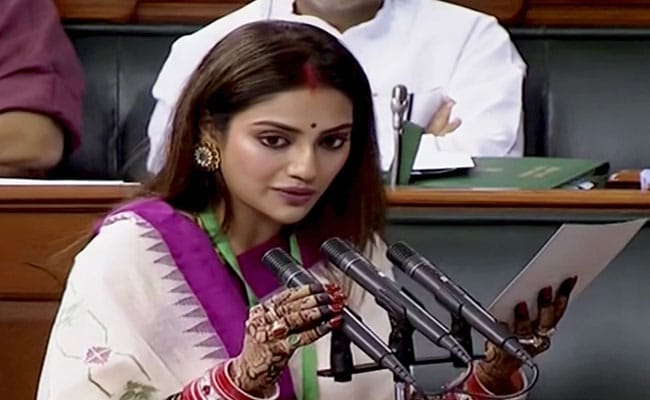 Nusrat Jahan was seen wearing vermillion, bangles when she took oath in parliament.

Newly-elected Trinamool Congress parliamentarian Mimi Chakraborty has backed her party colleague and friend Nusrat Jahan who has been criticised by some Muslim clerics for wearing vermilion (sindoor) and bangles in parliament.

Nusrat Jahan, a first-time parliamentarian and a popular Bengali actress, on Saturday hit back at the critics saying she represents an "inclusive India". In a post, which she shared on Twitter, Nusrat Jahan wrote that "faith is beyond attire".

"Paying heed or reacting to comments made by hardliners of any religion only breeds hatred and violence, and history bears testimony to that," Ms Jahan, 29, wrote in an elaborate post.

The actor-turned-politician, who got married to businessman Nikhil Jain on June 19 in Turkey, was reacting to the criticism by the clerics based in UP's Deoband after she was seen wearing vermilion, bangles and a saree when she took oath in parliament earlier this week. The clerics claimed Ms Jahan "disrespected Islam" by marrying into a Jain family and called her attire "un-Islamic".

Several political leaders came out in Nusrat Jahan's support over the alleged fatwa issued against her; however, the UP clerics in some reports dismissed the claims that the fatwa was issued.

Mimi Chakroborty, also a first-time parliamentarian and a popular actress in Bengal, retweeted her friend's post on Saturday to mark her support and wrote: "We r indian and thats our only identification (sic)."

We r indian and thats our only identification
???????? proud indian nd will be
Love u @nusratchirpshttps://t.co/qTTP0nbzTI

She also said she will "always support" her friend. "I have supported and will support my friend whether she wears vermilion or bangles. One must respect one's personal life. In fact, we were trolled for even donning jeans. Women should be given respect and we represent the country," the 30-year-old was quoted as saying by news agency IANS.

The two Trinamool lawmakers were earlier trolled for wearing "western clothes" in parliament.

At that time too, Mimi Chakraborty had slammed the critics and asked why the cricketer-turned-BJP parliamentarian Gautam Gambhir was not subjected to similar scrutiny for turning up in the parliament in casual wear.

Among other leaders who have come out in Nusrat Jahan's support after the fatwa was issued against her are BJP's Babul Supriyo. "Everybody has the right to lifestyle choice. No one can issue any fatwa on one's personal choices. I will congratulate Nusrat who married recently. I saw her in parliament and she sported bangles and vermilion, which is her own choice and she carried herself well. She is doing the right thing," Mr Supriyo, who is also a lawmaker from Bengal, was quoted as saying by news ageny IANS.

Told My Dad "Want To Marry Her, But She's Christian": Tejashwi Yadav To NDTV