The popular Bengali actresses wore pants and tops which did not go down well with a certain section of people who said they were not "appropriately dressed" for the Parliament. 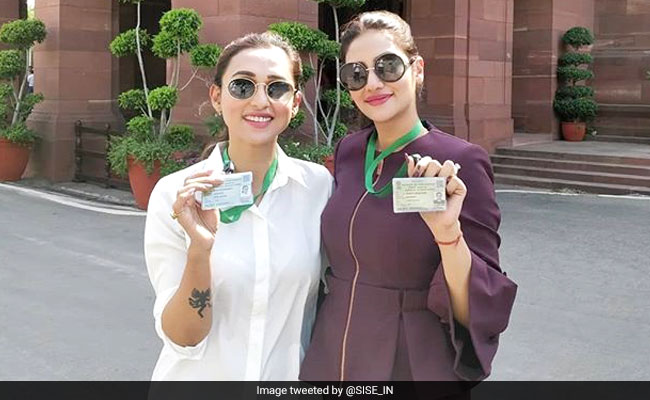 Newly elected Trinamool Congress lawmakers Mimi Chakraborty and Nusrat Jahan were trolled by a number of people on social media for their choice of clothes at the Parliament on Monday. However, the actresses found support from many who welcomed the attire change in Parliament where most women lawmakers are seen wearing sarees.

The popular Bengali actresses wore pants and tops which did not go down well with a certain section of people who said they were not "appropriately dressed" for the Parliament.

One social media user commented: "Parliament is not a photo studio", while another user slammed Mimi Chakraborty saying "she is not suitable for the position".

There were many who came out in full support as well. One user praised Ms Jahan for her "attitude". Another one congratulated her on her victory and encouraged her to "work like a lioness".

The support was aplenty in the face of backlash.

Even I just can't unsee this.

She represents her generation. And she must wear this identity proudly on her sleeves. https://t.co/mEIUKuWovs

The two Tollywood actresses had on Monday posted photographs displaying their identity cards as MPs on the premises of Parliament.

Nusrat Jahan also posted a picture on Twitter standing in front of the Parliament thanking Bengal Chief Minister Mamata Banerjee and the people of her constituency for her landslide victory:

A new beginning..!! I thank @MamataOfficial and people of my #Basirhat constituency to have belief in me.. pic.twitter.com/GU4Xcyz1Ff

The lawmakers pulled off an impressive victory in their seats despite being new to politics.

Ms Chakraborty, 30, won from Kolkata's Jadavpur, by over almost 3 lakh votes. Nusrat Jahan, 29, won in the Basirhat seat by over 3.5 lakh votes. Trinamool Congress had won both seats by a margin of less than 1,30,000 in the 2014 Lok Sabha elections.

The Trinamool had fielded 17 women candidates in 42 seats in the state. The young actresses were trolled heavily on social media immediately after Mamata Banerjee announced their candidature.

This is not the first time that a woman politician has been criticised for her choice of clothes. Earlier this year, Congress General Secretary Priyanka Gandhi Vadra's change of display picture on Twitter -- from a saree-clad look to one in a pair of jeans -- too sparked debate on social media.