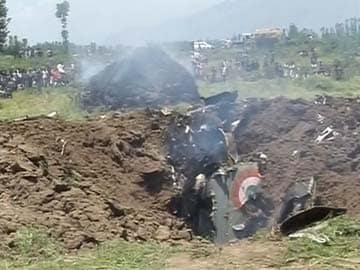 Army officials inspecting the remains of a MIG 21 fighter plance that crashed at Sangam in Bijbihara, 45 Km from Srinagar on Tuesday.

Jammu: A MIG-21 fighter aircraft of the Indian Air Force or IAF today crashed in Bijbehara area of Anantnag district in Kashmir, killing the pilot.

The pilot, Squadron Leader Raghuvanshi, 32, was killed in the crash, they said. According to the villagers present there, the pilot steered the plane away from populated areas to save civilians lives.

"Once we heard about the crash we rushed to the site, took out the body of pilot and handed it over to the army and police," said a villager Mushtaq Ahmad.

The MIG-21, which was on a routine exercise, crashed in an open field at Mirhama in Bijbehara area, 45 kms from Srinagar, defence sources said.

Squadron Leader Bansi was a resident of Surat and had married four years ago.

The MIG-21 had taken off from Technical Airport in Srinagar today morning, sources said.

The cause of the crash was not immediately known. The Air Force has ordered a court of inquiry.

While speaking about the incident, Defence Minister Arun Jaitley said he was "sorry" and that it was "a matter of grave concern."

"My heart goes out to the pilot who lost his life," he said.

Promoted
Listen to the latest songs, only on JioSaavn.com
Chief Minister Omar Abdullah tweeted, "My condolences to the family, friends & colleagues of the pilot killed in the MIG crash today. May his soul rest in peace."